Spot power prices are expected to be supported by slightly colder weather this weekend which will lead to a rise in demand, however temperatures should improve next week and a bearish trend is expected. The expected drop in temperatures helped gas prices climb higher yesterday and the bulls were also assisted by a short UK gas system. Today UK LDZ demand is expected to rise to its highest level since the 14th February; increasing by 18mcm. Temperatures in March are expected to be mild and storage levels are healthy meaning Front-Month contracts should move down. Today's prices can also be found in an easy to read table on our 'current UK energy price' page.

Gas contracts posted gains yesterday displaying an upward movement as high as 0.90ppt on the back of a higher demand forecast for today and the weekend. Day-Ahead rallied 0.55ppt higher while less prominent gains were observed further along the curve. The power curve also displayed a bullish trend and took direction from gas with Day-Ahead climbing £0.50/MWh higher following a drop in wind and nuclear production. Meanwhile, two nuclear units at Sizewell are expected to return online this afternoon.

The UK gas system opened long this morning as gas flows increased; Rough was the main contributor as output at the facility rose from 0mcm to 43mcm. Despite the cold weather expected over the weekend most contracts registered losses today with weaker Brent a factor. Storage levels currently stand at 57% which is 30% higher than this time last year; this is having a bearish effect on seasonal contracts. Power prices were dictated by the losses seen on the gas curve however the movement was not as significant as their counterpart's. Carbon contracts showed little change this morning while Front-Month APi2 coal fell by $0.10/tn. Day-Ahead power opened at a £0.50/MWh discount as wind production is expected to improve on Monday.

Market close data has revealed that the 1-year forward price for both commercial gas & commercial electricity decreased - closing at 60.90ppt and £49.03/MWh, respectively. This can be seen in the graph below. 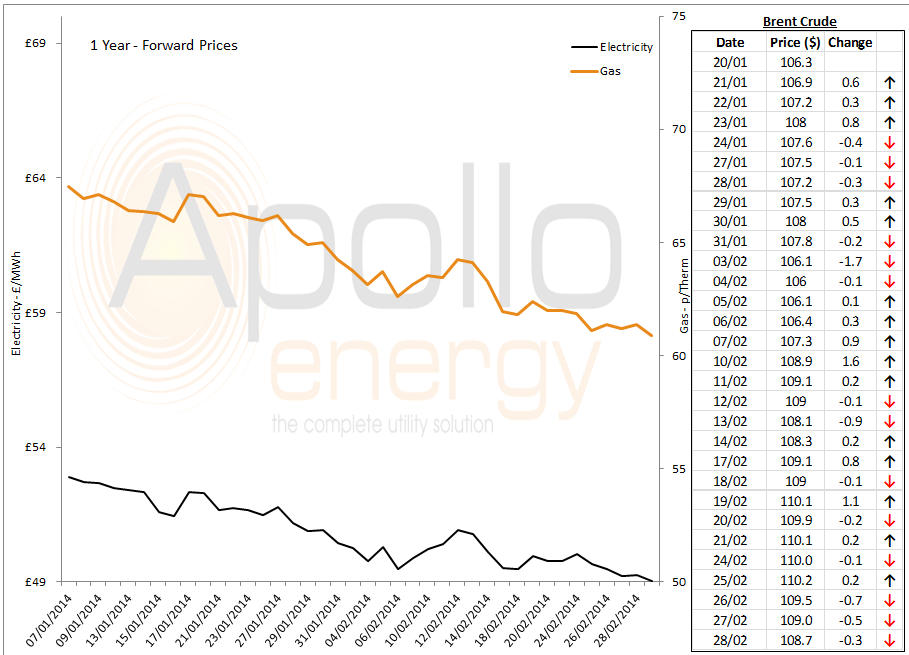