Spot prices were slightly higher because of weak renewable energy production and France's worries were helped by extra hydro power and wind generation. Nuclear power availability was limited and not far off its lowest generation levels in history although the low temperatures should reduce the downside in spot prices until the weekend. Continue reading for a more in-depth look at today's energy market prices.

How did the energy markets close? Day-Ahead gas closed at 83.5ppt a rise of 4ppt from its opening price due to the continued low weather temperature and depleted storage supplies which meant demand from Britain was higher than normal this time of year. Front-Month increased by 1.55ppt and front-Quarter rose by 1.20ppt even though there was an improvement in LNG flows. Day-Ahead power closed at £56.70/MWh and drop of £0.30/MWh due to a lower demand in power and increased wind generation. As gas rose by 6ppt the Day-Ahead spark spread reflected it negatively and the new Front-Month gained £0.75/MWh day-on-day.

How did the energy markets open? Day-Ahead gas fell but the rest of the curve rose with Front-Month showing a gain of £0.40/MWh whereas Winter13 remained at £56.75/MWh. Wind power is currently generating at 45GWh and remains strong. Day-Ahead power opened higher this morning due to delayed restarts at 2 of the units at the Cottam plant. The UK fuel mix saw coal generation fall by around 42% thought to be because AP12 Front-Month gained $3/tn whereas CCGT generation made up 29% of the mix and a further dependency on gas is expected in the near future. 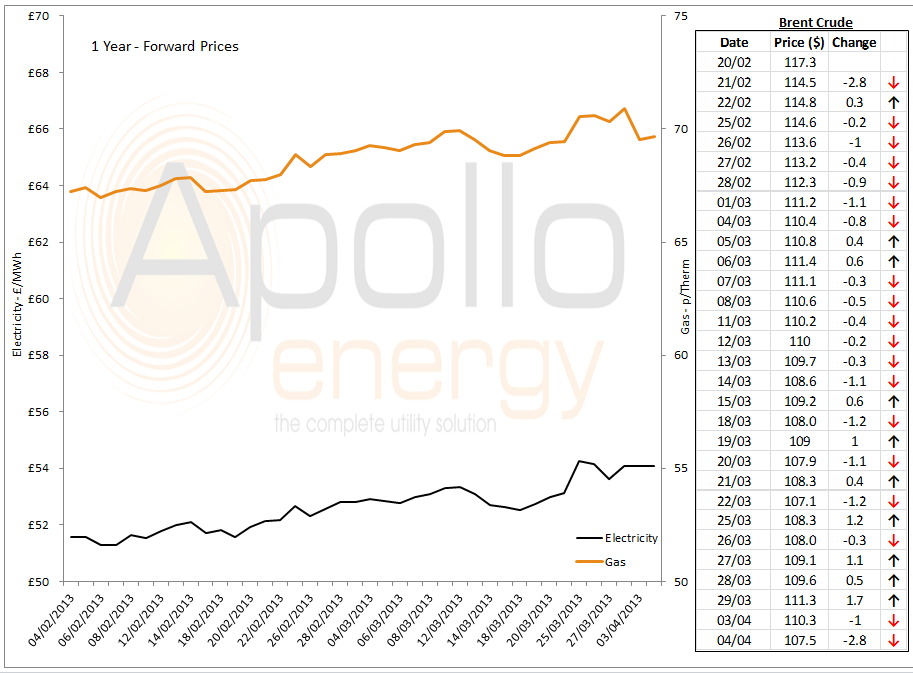 Latest Brent Crude Oil prices Brent prices were close to 106.78$/b, their largest daily drop in 5 months while Timespreads became much weaker. Gasoil cracks stayed around 14.5$/b but heating oil and gasoline cracks saw a big drop. Total stocks were practically unchanged and crude stocks saw a rise even though there was a rebound in refinery runs and reduced crude imports.