Spot prices fell yesterday helped by the usual drop in demand on Fridays and ample supply, although on the Far-Curve clean fuel costs rose. German prices continue to display a bearish trend but could benefit from a technical rebound which should temporarily support prices.

Day-Ahead gas fell by 0.65ppt as the majority of prompt contracts made losses yesterday, May-13 and July-13 dropping by 0.30ppt and 0.25ppt, respectively. Gas storage levels were just under 20% which helped to lower prices, while Far-Curve contracts also closed at a discount. The Power curve saw Day-Ahead shed £0.85/MWh to close at £46.50/MWh and Front-Month lost £0.25/MWh, ignoring the considerable rise made by Brent. Lower demand is expected over the Bank Holiday weekend which has helped to reduce prompt prices although movement on the rest of the curve was mixed with most contracts showing no change.

NBP contracts made a small gain as a consequence of Brent rebounding strongly but Day-Ahead fell for a second day running and made a loss of 0.25ppt. Flows via the Langeled pipeline dropped to 18mcm which led to the system opening at 14mcm short. LNG send outs made up 49mcm of the UK gas supply and the South Hook terminal is expecting 5 new cargoes next week. Power contracts made up some of the losses occurred in yesterday's session apart from Day-Ahead which mimicked Day-Ahead Gas by shedding £0.25/MWh. Coal generation made up 38% of the generation mix as a result of the Cottam coal-fired plant going offline last night.

Market close data has revealed that the 1-year forward price for both commercial gas & commercial electricity fell slightly - closing at 66.95ppt and £51.10/MWh, respectively. This can be seen in the graph below. 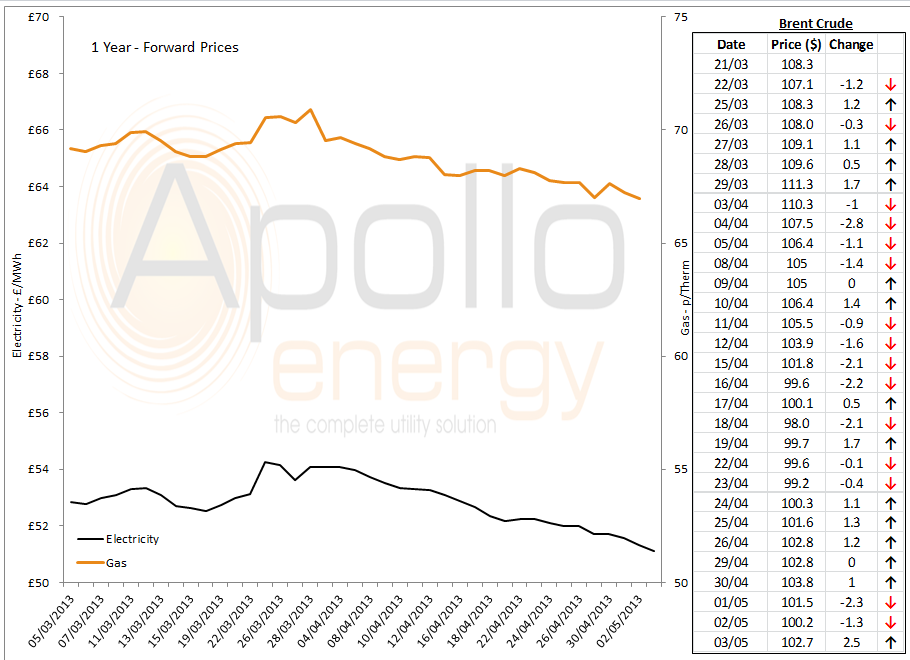 Brent prices made a large gain yesterday which cancelled out the losses made over the last two days. The rise in price is thought to have been helped by an improvement in the US unemployment situation and positive European Central Bank meetings as well as added support from risk appetite on the financial market.