Spot prices are expected to drop slightly as the week progresses due to warmer weather and less consumption expected over the European public holidays. Hydro production in France continues to hit record highs for this time of year although a number of thermal outages in Germany have reduced coal production. The weather is set to become cooler over the weekend and at the start of next week which could see consumption increase.

Day-Ahead gas made a slight rise of 0.20ppt with May-13 and June-13 going up by 0.40ppt and 0.55ppt, respectively. The Far-Curve also saw a series of gains ignoring the improved weather temperatures, the decrease in flows coming from Langeled as a result of maintenance was the biggest influence in prices. Prompt power prices also closed higher with Day-Ahead making a gain of £0.75/MWh and Front-Month rising by £0.30/MWh, further along the curve the majority of seasonal contracts added to their price. Carbon prices also went up which has led to more officials voicing their support for the back-loading scheme. A 500MW nuclear reactor in Heysham also went offline on Thursday and isn't expected to return to normal until the start of next week.

Despite the drop in demand which was occurred over the bank holiday weekend the gas curve saw a number of gains with Day-Ahead going up by 0.25ppt and some contracts rising by around 0.80ppt further along the curve. Linepack opened at 1mcm long while Langeled flows increased to 32mcm which is almost twice what they were on Friday, although maintenance will continue till the end of the week. Day-Ahead saw an increase of £0.25/MWh as prices climbed across the power curve, carbon prices also increased and German officials are keen to reach an agreement over the back-loading deal to stem this continued rise. Wind generation dropped to 33GW and currently holds a 2% share of the generation mix with gas fired generation holding 20%.

Market close data has revealed that the 1-year forward price for both commercial gas & commercial electricity went up - closing at 67.30ppt and £51.65/MWh, respectively. This can be seen in the graph below. 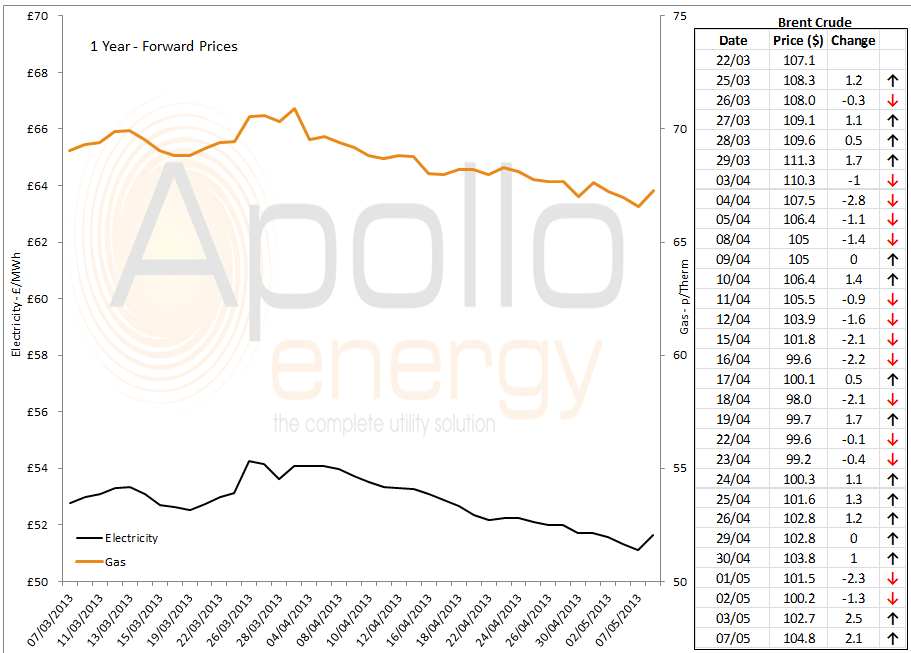 Brent prices made another gain yesterday and closed near $105.5/b, although there was no clear indication why this rise occurred. The latest EIA monthly report and API data suggest oil inventories in the US are set for another increase and US shale output continues to rise.