The Spot market is set to look stable over the next few days with weather temperatures expected to remain as they are until next Tuesday when they should rise above the seasonal average, the public holidays will also lower power consumption. Nuclear availability in France should add around 2GW next week and hydro production is still generating at a record high for this time of year. In Germany solar production should see an increase but lignite and wind production will remain at low levels.

Day-Ahead gas saw no change yesterday while losses were made on the rest of the Near-Curve, with Front-Month dropping 0.35ppt to close at 63.95ppt. The Far-Curve also had a bearish outlook due to a decrease in demand, falling Brent prices and an improvement in the weather. The Power-Curve saw little change as the warmer weather and reduced demand was countered by a decrease in wind generation. Front-Month dropped by £0.35/MWh and closed at £47.90/MWh while prompt contracts also made losses, prices on the Far-Curve also fell on the back of lower carbon prices.

Day-Ahead fell by 0.45ppt and Front-Month made a loss of 0.15ppt, while movement in seasonal contracts was small despite Brent making another considerable price-drop. Gas flows were improved due to storage withdrawals, with Holford withdrawing at a rate of 22mcm. The majority of the Power-Curve made considerable losses, most notably Day-Ahead which fell by £1.50/MWh. API2 coal prices and decreasing carbon allowances helped lower power prices with the warmer weather also having an impact. Meanwhile wind generation's share of the generation mix dropped by 1% with little change elsewhere.

Market close data has revealed that the 1-year forward price for both commercial gas & commercial electricity made losses - closing at 66.95ppt and £51.30/MWh, respectively. This can be seen in the graph below. 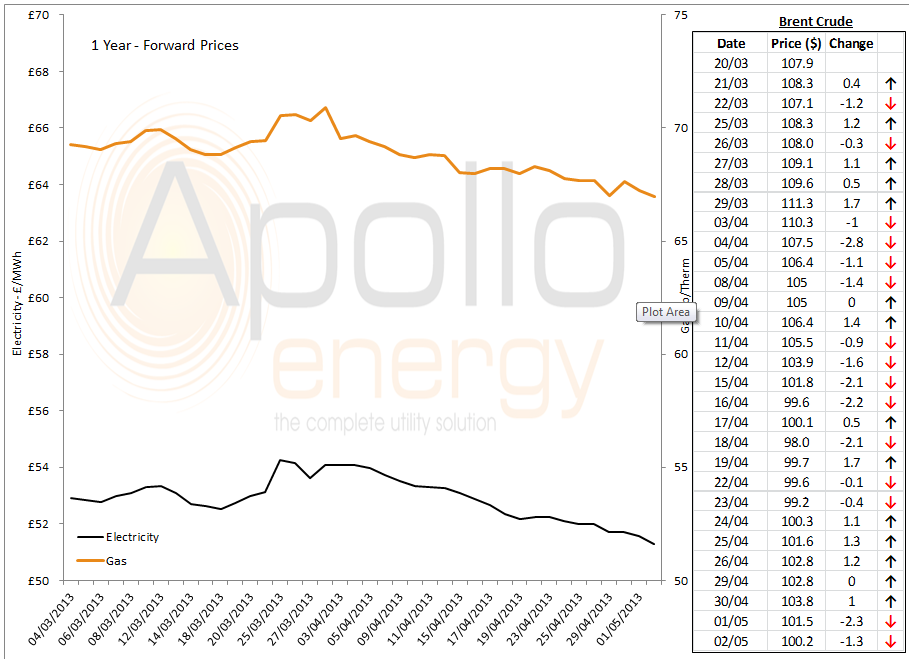 Brent prices continue to drop and have shed around 3.85 $/b over the last two days, hitting a low of 98.76 $/b yesterday. Stock levels have risen by 12.4 Mb with crude stocks hitting a record high after going up by 6.7 Mb; crude imports have seen a 0.6 Mb/d rise, distillate stocks gaining 0.5 Mb and gasoline stocks have gone down by 1.8 Mb.