Spot power prices increased yesterday with support coming from rising gas contracts and lower renewable generation. Numerous outages have also occurred across Europe including a Belgian biomass plant and a large coal-fired facility in Holland. European gas prices were generally bearish yesterday due to the warmer weather but UK prices were pushed higher by an under-supplied system. Temperatures are expected to improve further tomorrow which should help the UK gas system become more comfortable. However, today's outlook remains slightly bullish due to the current undersupply. Today's prices can also be found in an easy to read table on our 'current UK energy price' page.

Gas contracts rallied higher on Wednesday due to the under-supplied UK gas system and a weaker British Pound. The system was over 23mcm short which resulted in additional storage withdrawals. The effects of weaker Brent were offset by higher coal prices although warmer temperatures restricted some gains on the near-curve. Power contracts also closed at a premium as maintenance at the Hunterston B nuclear power station is to be extended until the end of the week and will be running at half the capacity over the weekend.

Gas prices have displayed further gains this morning, although they are smaller than those recorded yesterday. Continued undersupply in the UK remains the main driver of the market although a warmer weather forecast has helped to limit today's upward movement. Power contracts have taken direction from gas and gains can be observed across the curve. Day-Ahead was the exception to the upward movement despite low wind generation as the contract was dictated by the usual drop in industrial consumption on Fridays.

Market close data has revealed that the 1-year forward price for both commercial gas & commercial electricity increased - closing at 46.62ppt and £44.53/MWh, respectively. This can be seen in the graph below. 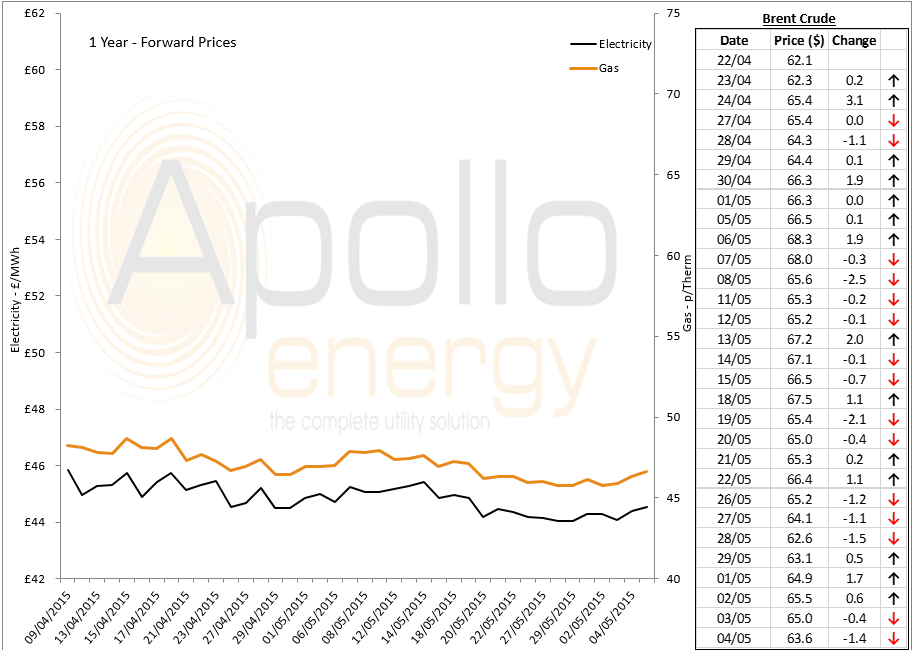 Brent 1st-nearby prices have recorded a significant decrease yesterday and this morning, falling by around $1.8/b and now trade at around $63.6/b. Direction came from a weaker US Dollar and market uncertainty caused by strong supply levels and low demand.