Spot power prices decreased over the weekend as temperatures remain slightly above average across Europe, resulting in stable demand levels. Wind generation is also set to improve and should remain healthy for the rest of the week, particularly in Germany. Gas prices displayed mixed movement on Friday as scheduled maintenance at facilities in Norway lifted some contracts on the near-curve. The UK gas system is short this morning partly due to the drop in Norwegian supply, however, the supply outlook for the rest of the week looks stable and movement this morning is minimal. Today's prices can also be found in an easy to read table on our 'current UK energy price' page.

Gas prices moved higher during Friday's session as demand levels were above average and maintenance got underway in Norway, reducing imports into the UK. High levels of storage injections and exports to Belgium contributed to these high demand levels. Power prices initially opened higher on Friday but decreased later in the day following a drop in oil prices. Day-Ahead power was the exception to the downward movement as strong domestic demand and a weaker solar generation for today provided support.

Movement on the gas curve is minimal this morning as this week's supply/ demand forecast is set to be less strained, despite the gas system opening short this morning. Elsewhere, the British Pound has strengthened against the Euro once again following Greece's rejection of EU reform proposals. Power prices follow a similar trend to gas this morning as a weaker demand outlook and improved wind generation has offset a significant drop in solar production. Weakening Brent helped to weigh on the far-curve, although coal prices have shown next to no movement over the past week.

Market close data has revealed that the 1-year forward price for both commercial gas & commercial electricity decreased - closing at 45.75ppt and £44.33/MWh, respectively. This can be seen in the graph below. 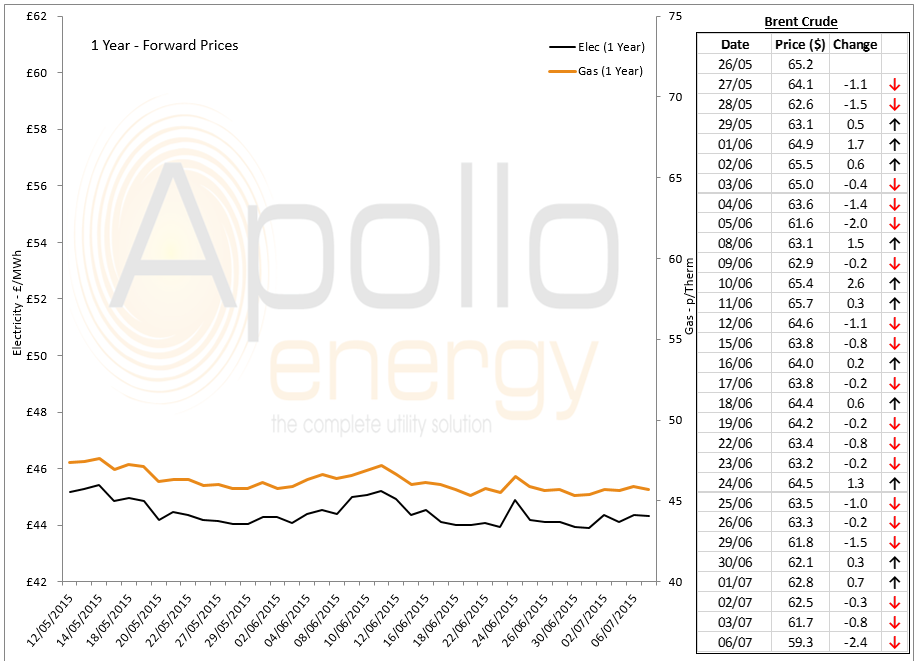 Brent 1st-nearby prices have posted significant losses, falling by almost $2.4/b to trade at $59.29/b. The main factor for this downward trend is the on-going situation regarding Greek debt which could have a big impact on the Euro.