Spot power prices moved down on Friday as wind generation levels were set to improve over the weekend and warmer weather is forecast to return to the UK. This bearish trend has continued this morning as the supply/ demand outlook remains healthy. Gas prices also decreased by the end of Friday's session as a drop in storage injections outweighed the effects of reduced Norwegian supply. Warmer weather, improved Norwegian supply and low storage injections have resulted in a long UK gas system this morning, further weighing on gas prices. Today's prices can also be found in an easy to read table on our 'current UK energy price' page.

Gas prices were on the decline on Friday as storage withdrawals were reduced which lowered overall demand levels. Centrica announced that another outage had occurred at the Rough storage facility which restricted injections to 9mcm. However, weaker Norwegian imports slightly offset the decrease in demand as flows into the UK fell to 23mcm. Meanwhile, most far-curve contracts moved down as two LNG deliveries are expected to arrive in the UK this week, with a stronger Pound also adding to the bearish sentiment. Power prices closed at a discount on Friday on the back of stronger renewable generation and the temporary postponement of maintenance at a nuclear power station. A planned outage at the 550MW unit 21 Dungeness B nuclear plant is now set to take place between the 18th and the 30th of September, resulting in a stronger generation forecast for next month. In terms of renewable generation, wind production is expected to rise to 3.8GW today, compared to 1.6GW on Friday.

Demand levels are much more comfortable this morning as Norwegian supply has improved and storage withdrawals are still restricted. Warmer temperatures have also returned to some parts of the UK which has further reduced consumption. Elsewhere, maintenance has started at the Bacton SEAL entry point and output has fallen to 13mcm/day and is not expected to improve until Thursday; price-drops can be seen across the curve. Warmer weather is expected in the UK this week with temperatures of around 25 °C expected in London, lowering overall demand and weighing on near-curve power contracts. Further along the curve another sizeable drop in the price of oil has helped some contracts to shed from their price.

Market close data has revealed that the 1-year forward price for both commercial gas & commercial electricity decreased significantly - closing at 43.05ppt and £42.80/MWh, respectively. This can be seen in the graph below. 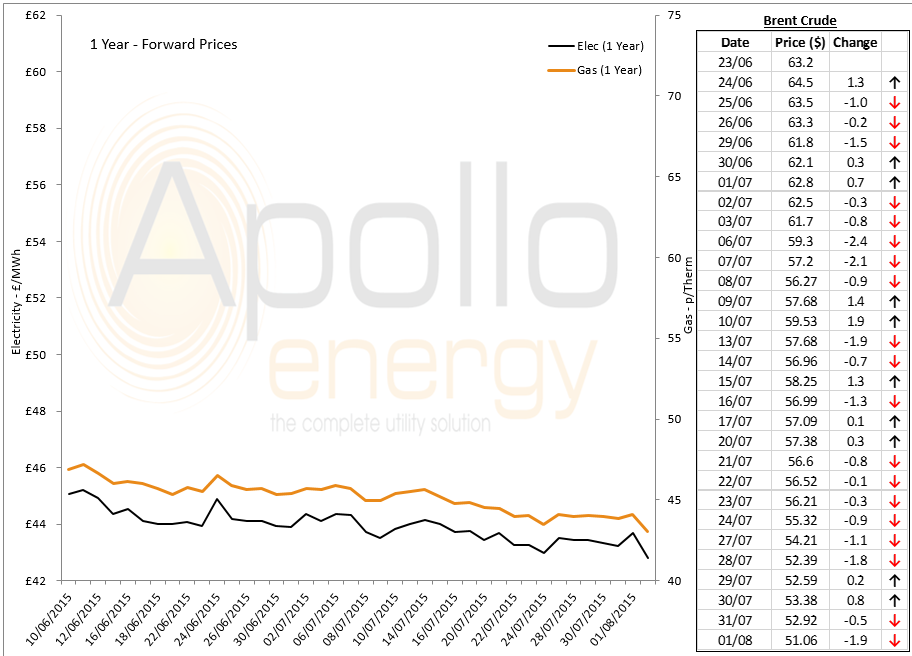 Brent 1st-nearby prices currently trade at $51.02/b, recording a loss of almost $1.9/b since Friday morning. Several large oil producers including Shell, Centrica and Chevron have announced that huge cutbacks will take place in attempt to stay afloat.