Spot power prices moved down yesterday with direction coming from weaker commodities, with gas, coal and oil all displaying a decrease. Generation levels also remain comfortable with higher wind levels forecast for today and a combined-cycle gas turbine also expected to return online. Gas prices displayed a significant drop on the back of a long UK gas system, with reduced storage withdrawals contributing to comfortable demand levels. Contracts have recorded a further loss this morning but the outlook is generally bullish as the Rough storage facility is expected to be back to full capacity this afternoon. Today's prices can also be found in an easy to read table on our 'current UK energy price' page.

Gas prices decreased on Monday as the UK gas system was 19mcm long in the afternoon. Demand levels were low as healthy renewables eased the UK's reliance on gas-fired generation and the outage at the Rough facility continued to restrict storage injections. The outage occurred on Sunday and is expected to continue until the end of today's session. However, the cap on storage injections was slightly offset by maintenance at the Britannia gas field, lowering output by around 8.5mcm a day until the 18th August. Price-drops were also visible on the power curve with most contracts following their gas counterparts and weaker coal. Front-Winter fell by £0.50/MWh to end the session at £44.40/MWh, while the Prompt also decreased due to the expected return of a 420MW power plant in Great Yarmouth today. A stronger wind generation also helped to weigh on the prompt with the losses filtering through to other near-curve contracts.

The gas system remains comfortable this morning as the outage at the Rough storage facility is yet to be resolved and demand levels have decreased due to milder weather. Weaker fuel prices have helped to weigh on some contracts further along the curve and scheduled LNG deliveries have offered further support to the bears. The downward movement on the power curve is less prominent this morning following the significant losses yesterday and over the weekend. A more comfortable supply picture and a drop in demand has helped near-curve contracts to shed from their price, while falling Brent continues to pressure down prices on the far-curve.

Market close data has revealed that the 1-year forward price for both commercial gas & commercial electricity decreased significantly - closing at 42.75ppt and £42.55/MWh, respectively. This can be seen in the graph below. 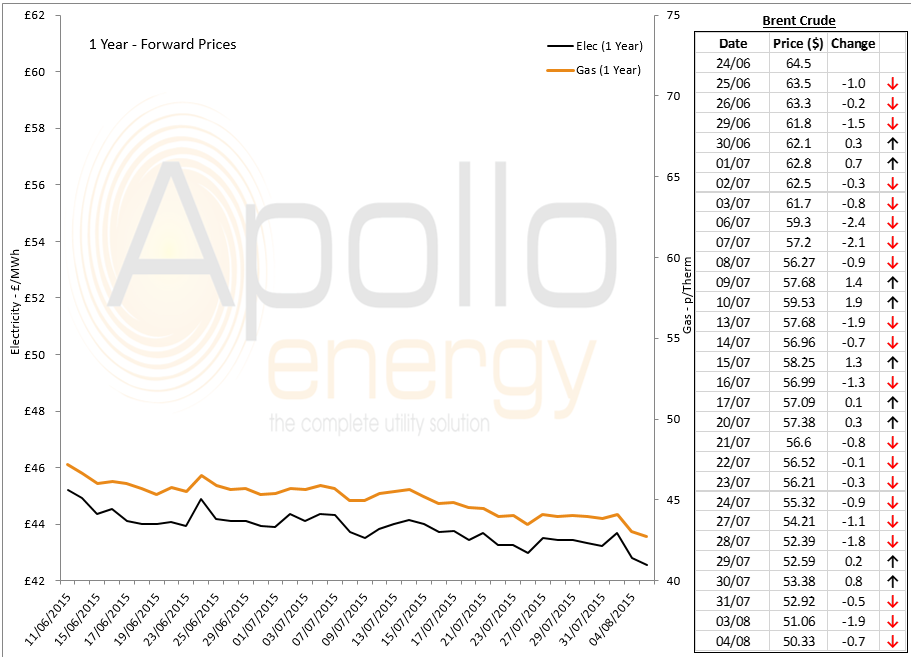 Brent 1st-nearby prices recorded another loss this morning and currently stand just above $50.3/b as high profile oil producers have announced major cutbacks due to the continued oversupply.