Spot power prices moved higher yesterday as a sharp drop in wind generation is expected on the continent and demand levels remain high. However, warmer weather has been forecast for next month which has resulted in a bearish outlook for today. Gas prices displayed a rebound on Thursday due to a busy session of trading following last week's price drops; strong demand and a weaker Euro also offered support. A reduction in Langeled flows due to an unexpected outage has resulted in an under-supplied UK gas system, leading to a series of gains this morning. Today's prices can also be found in an easy to read table on our 'current UK energy price' page.

Gas prices ticked higher on the near-curve as demand levels continued to rise as the outage at the Rough storage facility was resolved and temperatures remained below average. Storage injections rose from 9mcm to 18mcm yesterday but the gas system was balanced for the majority of the session, meanwhile, stronger Brent offered some support to far-curve prices. Most power contracts decreased on Thursday and ignored the bullish movement of gas, with direction coming from weaker carbon emission certificate prices. Emission prices fell on the back of reduced support from the International Monetary Fund in terms of Greek bailout proposals. The day-ahead contract was the exception to the downward movement with direction coming from weaker wind generation, although a 1GW increase in solar generation restricted the gains somewhat.

An unexpected outage in Norway has reduced Langeled flows into the UK and contributed to an under-supplied gas system; near-curve prices have climbed higher as a result. Further along the curve a slight drop in oil prices and a warmer weather forecast for August has helped to limit the gains. Power prices have generally followed their gas counterparts this morning although an expected rise in temperatures next week has limited the upward movement on the near-curve. The prompt fell by £1.10/MWh due to a weaker demand outlook and a drop in oil has helped to weigh on some contracts further along the curve.

Market close data has revealed that the 1-year forward price for both commercial gas & commercial electricity increased - closing at 44.11ppt and £43.70/MWh, respectively. This can be seen in the graph below. 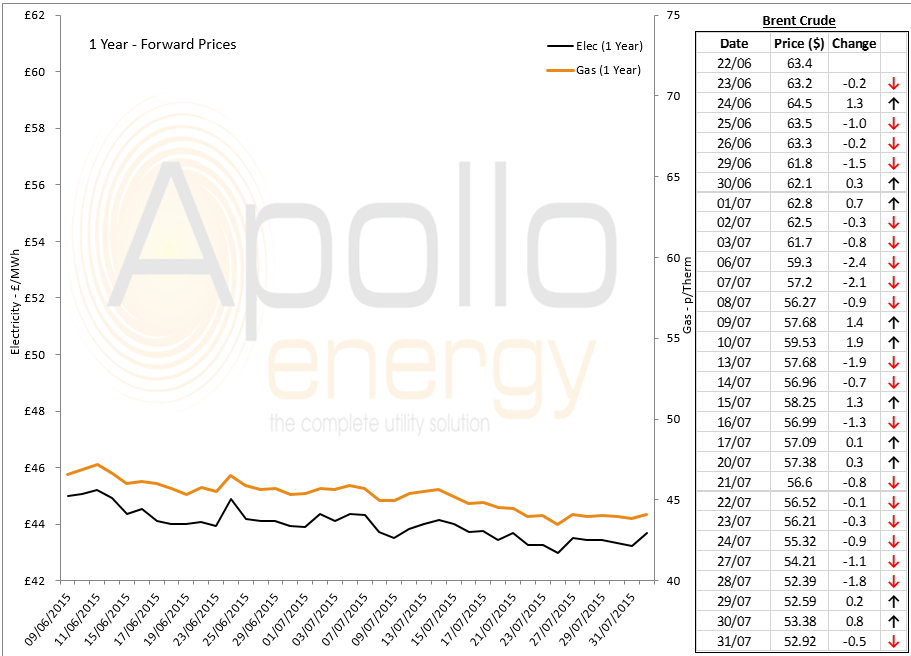 Brent 1st-nearby prices displayed little movement overnight and have stabilised just below $53/b. Brent has fallen by around $10/b over the course of July, representing oil's weakest month in 2015 so far.