Spot prices went up yesterday due to a low wind forecast although supply levels are expected to improve slightly. In terms of gas, demand is still rather low and supply levels are increasing which should see a drop in October-13 prices. Today's prices can also be found in an easy to read table on our 'current UK energy price' page.

Day-Ahead gas rose by 0.40ppt by the end of yesterday's session as the system opened 10mcm short due to the unplanned outage at the Theddlethorpe facility. The gains were limited however as the system moved 4mcm long by the end of the day thanks to an increase in flows from other terminals. On the power curve the system buy back price reached around £120/MWh as a number of hydro and coal-fired units were brought online to balance the system. Despite the higher buy back price, Day-Ahead made a loss of £0.10/MWh while Winter-13 was influenced by rising Brent and increased by £0.05/MWh.

Prompt prices went down this morning as linepack was expected to remain long for today's session which led to Day-Ahead falling to 64.45ppt. Seasonal contracts opened higher with bullish Front-Month Brent the main driver of prices on the far-curve. South Hook send-outs fell from 20mcm to 13mcm overnight and one LNG delivery is expected to arrive tomorrow. Near-curve power contracts made minor losses, with Day-Ahead and Front-Month falling by £0.05/MWh. Further along the curve numerous contracts were range-bound but Summer-14 and Winter-15 fell on the back of lower carbon prices.

Market close data has revealed that the 1-year forward price for both commercial gas & commercial electricity went up - closing at 67.58ppt and £51.73/MWh, respectively. This can be seen in the graph below. 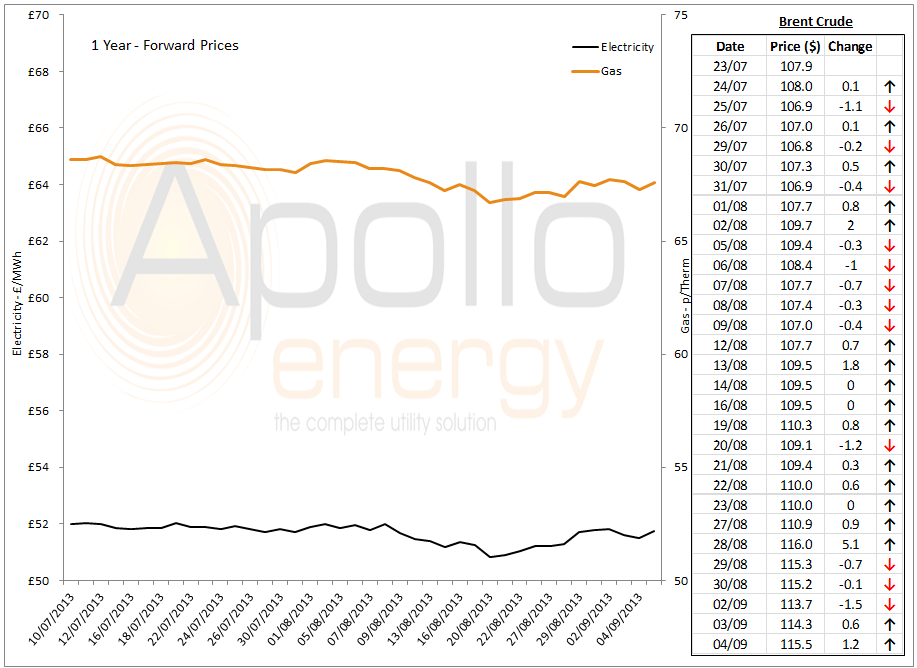 Front-Month Brent peaked at just under $116/b following news that the missile attack on Syria is edging ever closer. The WTI/ Brent spread increased by $0.49/b and is currently just below $7.5/b.