Spot power prices are expected to decrease over the next few days as supply levels are set to remain comfortable over the weekend, following the return of several power plants and a rise in wind generation.

Gas prices moved higher yesterday due to issues at Norwegian gas facilities, reducing imports into the UK significantly. However, Norwegian supply is close to normal levels again this morning and this has helped to weigh on prices.

Day-Ahead gas displayed a gain by the end of yesterday's session despite opening at a discount. Norwegian imports via the Langeled pipeline fell from 71mcm to 0mcm due to a problem at the Sleipner platform, leaving the system short and pushing most near-curve contracts higher. Further out, a strengthening British Pound helped prices to correct downwards, despite higher oil prices.

Near-curve power prices followed the movement of gas which increased following a drop in supply; also assisted by a rise in carbon emission prices. However, the prompt weakened as wind generation is expected to improve by around 1GW today, while the usual drop in industrial demand on Friday's was also a factor.

The UK gas system remains short this morning but the issue at the Sleipner platform has been resolved and flows via the Langeled pipeline have resumed; although output is lower than in previous sessions this week. Overall movement is bearish this morning as storage injections are reduced due to maintenance and two LNG deliveries are expected next week.

Power prices have erased some of yesterday afternoon's gains this morning as the generation outlook is healthy. Nuclear production is much improved following the end of maintenance at various facilities, while renewable generation is also higher. The Longannet coal-fired power plant in Fife, Scotland has also returned ahead of schedule, helping supply levels further.

Market close data has revealed that the 1-year forward price commercial gas increased, while commercial electricity posted a small loss - closing at 42.78ppt and £42.95/MWh, respectively. This can be seen in the graph below. 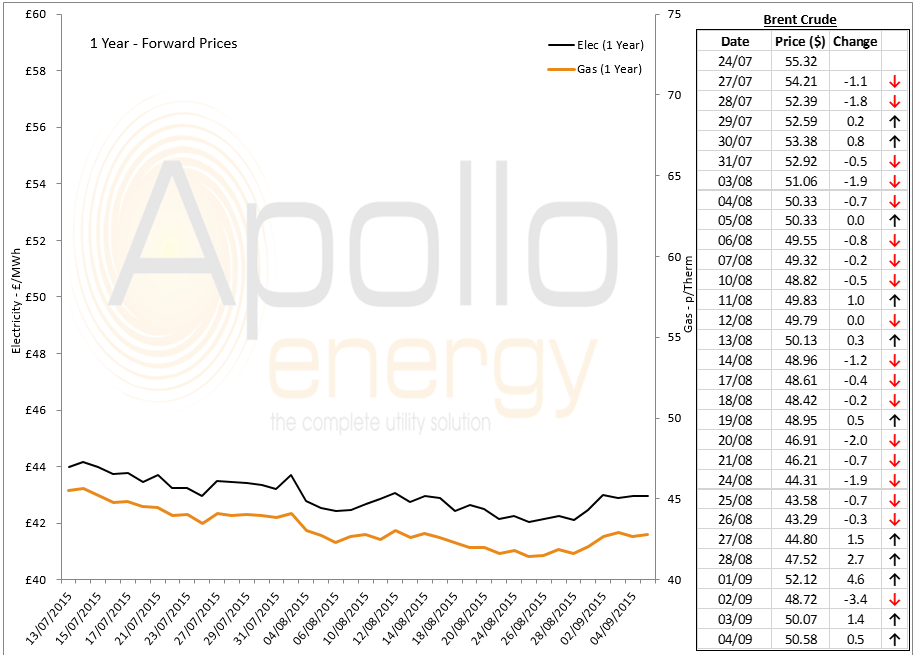 Brent 1st-nearby prices display little movement at present following a turbulent week and currently trade at around $50.5/b. Chinese markets have been shut for two consecutive sessions and a national holiday in the US have resulted in the current lack of activity.