Spot power prices are generally lower this morning than they were at Friday's close. Milder weather in Europe over the weekend resulted in below average demand levels and also offset the effect of weak wind generation. A slight drop in temperatures is expected later in the week which could push prices higher this afternoon, but this will depend on movement on the gas curve. Gas prices displayed large drops on Friday on the back of a positive conclusion to talks between Ukraine and Russia. UK LDZ is expected to rise by 51mcm which has left the UK gas system short. The colder weather forecast combined with the usual rise in demand on Mondays should lead to bullish movement today. Today's prices can also be found in an easy to read table on our 'current UK energy price' page.

Gas prices fell lower on Friday following an agreement in Brussels regarding Russian supply into Europe and the payment of Ukrainian debt. This improved supply outlook helped to weigh on the far-curve with further direction coming from a stronger British Pound. Power prices were on the decline on Friday with a mild weather forecast for the weekend the main driver of prices. Further along the curve the majority of prices followed their gas counterparts and moved down.

The UK gas system was 18mcm short this morning despite overall gas flows increasing by 16mcm over the weekend; Day-Ahead has climbed 2.10ppt higher as a result of this short supply. Langeled output has risen by 15mcm, South Hook send-outs increased by 10mcm, while BBL flows declined. Power prices opened at a premium this morning and were supported by stronger gas contracts. In terms of the generation mix, nuclear and wind displayed a combined increase of 9%, while gas-fired generation fell from 33% to 24%. Day-Ahead added £8.25/MWh to its price due to stronger gas prices and a weak wind generation forecast.

Market close data has revealed that the 1-year forward price for commercial gas increased while commercial electricity moved down - closing at 55.58ppt and £50.25/MWh, respectively. This can be seen in the graph below. 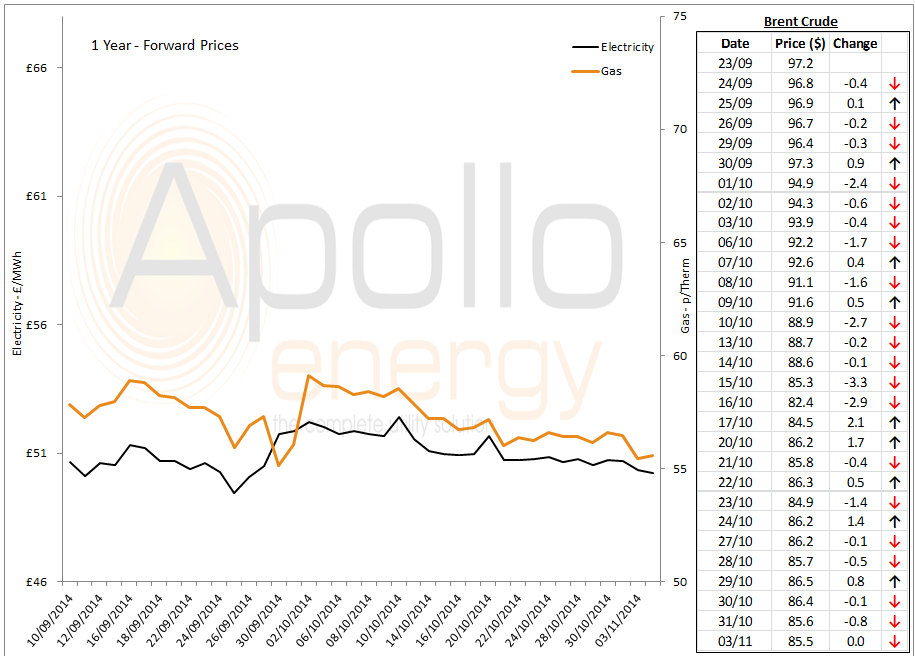 Brent 1st-nearby prices decreased on Friday and currently trade at around $85.5/b. Meanwhile, WTI has fallen to its lowest prices since June 2012, trading at $80/b with influence coming from a stronger US Dollar.