Spot power prices are expected to edge higher today on the back of reduced supply, with lower wind generation expected over the next few days. Solar production and nuclear availability in France has also decreased, providing further support to the bulls. However, the gains will be slightly limited as above average temperatures are set to return later in the week. Gas prices climbed higher yesterday due to a stronger demand forecast and numerous outages in Norway, resulting in short supply. UK demand is expected to be 4.5% above the seasonal norm today but Linepack is long this morning due to improved LNG send-outs. Prices are expected to move down later today with falling Brent an additional factor. Today's prices can also be found in an easy to read table on our 'current UK energy price' page.

Gas prices rallied higher on Monday due to above average demand levels and slightly weaker supply. Losses on the far-curve were less prominent as temperatures are expected to improve on Thursday and over the weekend. Low wind generation resulted in strong gains for Day-Ahead power and this bullish sentiment spread across the rest of the curve. Weakening Brent failed to have much impact on far-curve prices which took direction from their gas counterparts.

Gas prices eased down this morning with the losses most visible on the near-curve as January-15 shed 0.55ppt from its price. Day-Ahead showed a small decrease but the downward movement was restricted by the colder weather currently being experienced in the UK. Temperatures are expected to pick back up later in the week but should fall towards the seasonal norm as we approach December. Overall gas flows improved this morning as South Hook and the BBL pipeline both improved their output into the UK. Movement was quite varied on the power curve this morning with Day-Ahead climbing £3/MWh higher on the back of a weak wind generation forecast. Further along the curve the movement ranged from a loss of £0.40/MWh to a gain of £0.05/MWh. Elsewhere, seasonal contracts ignored falling fuel prices.

Market close data has revealed that the 1-year forward price for both commercial gas & commercial electricity moved down - closing at 55.08ppt and £50.23/MWh, respectively. This can be seen in the graph below. 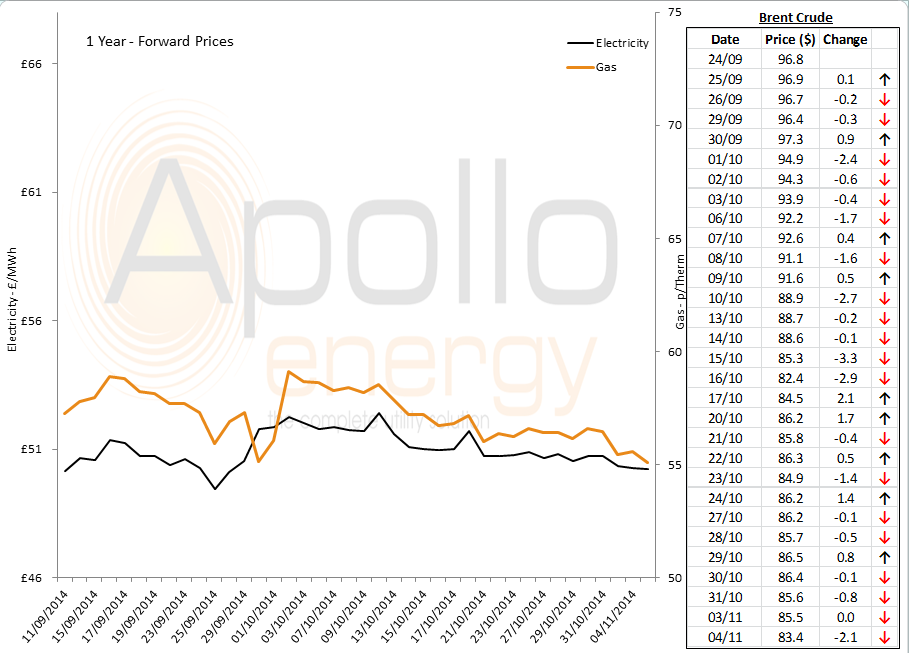 Brent 1st-nearby prices fell to almost $84/b by the end of yesterday's close as Saudi Arabia confirmed it will reduce the price of exports to the US. Prices fell further this morning and currently trade at around $83.3/b.