The spot power market showed little change yesterday as fundamentals have been rather stable throughout the week. Weaker renewable generation on the continent and numerous nuclear outages in France could push prices higher this afternoon but little movement is expected. Gas prices recorded losses yesterday on the back of falling demand and healthy supply levels. A deal was reached between Russian and the Ukraine to resume gas deliveries until March 2015 and this should weigh on prices further this afternoon. Today's prices can also be found in an easy to read table on our 'current UK energy price' page.

A positive conclusion to talks between the Ukraine and Russia helped the bears take control of the gas curve yesterday with contracts falling by 0.50ppt on average. Downward movement was observed on the far curve as a result of these talks and a mild weather forecast. The majority of power prices moved down yesterday on the back of a warmer weather forecast in the UK; Day-Ahead fell to £43.30/MWh as a result of the expected drop in demand.

Downward movement continued this morning with Day-Ahead and Front-Month contracts shedding around 1ppt from their prices. The UK gas system opened 15mcm long which was another factor for the prompt contract's loss. Overall gas flows are higher today with BBL output increasing from 14mcm to 26mcm. Demand levels are expected to be 3GW lower today but some bullish pressure was provided by a weaker wind production forecast; Day-Ahead recorded a small loss. A number of hydro power units were brought online overnight to help balance the system which led to a higher system buy-price. On the far-curve most contracts weakened at the start of the session but recorded mixed movement as trading got underway.

Market close data has revealed that the 1-year forward price for both commercial gas & commercial electricity decreased - closing at 56.43ppt and £50.35/MWh, respectively. This can be seen in the graph below. 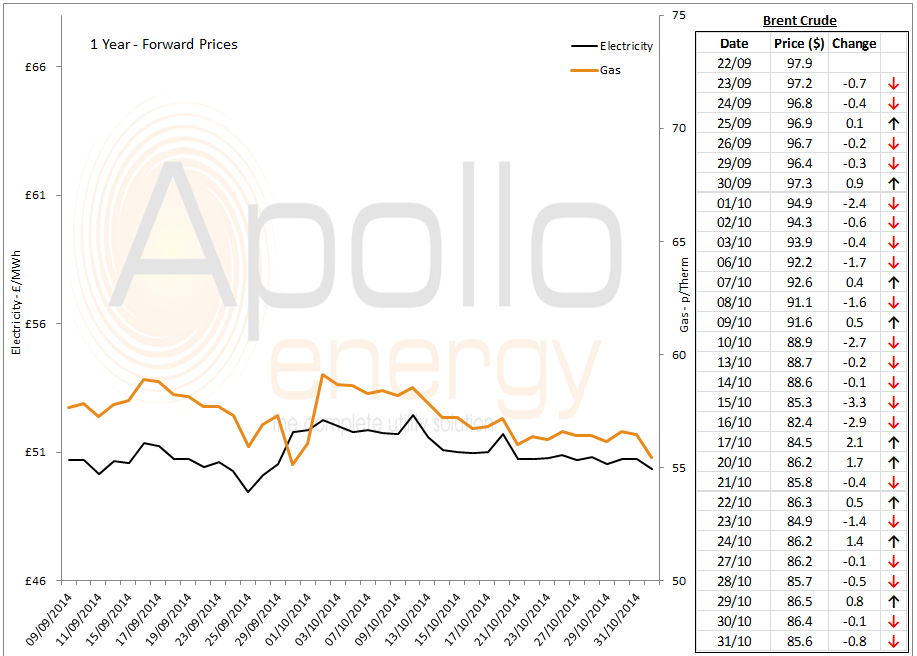 Brent 1st-nearby prices moved down yesterday as oil fundamentals were generally bearish. Brent is set to record a loss of over $9/b over the course of October, its largest monthly loss since 2012.