European spot prices saw mixed movement yesterday as losses were seen in Germany due to an increased wind generation forecast, while cold weather pushed UK and French prices higher. Further outages in Norway and rising residential demand expected at the end of this week helped gas prices move up yesterday. Today UK LDZ demand is 12mcm higher and is 2.5% above the seasonal average however Norwegian flows have improved. Stronger gas flows have helped towards a healthy supply picture and a long system; gas prices are expected to fall as a result. Today's prices can also be found in an easy to read table on our 'current UK energy price' page.

Day-Ahead gas rose by 0.55ppt due to a decrease in Langeled flows as Nyhamna was still experiencing problems. The Rough storage facility also saw its withdrawal rate fall by around 50% which helped to support the bulls. Gains were seen across the curve with Quarter-14 registering the biggest increase of 0.80ppt. The cold weather forecast and strengthening Brent were the main drivers of prices on the far-curve. On the power curve Day-Ahead closed at a £1.00/MWh premium as prices took influence from stronger gas and oil contracts. Higher demand levels have also had an effect on the power market and a higher wind generation forecast was ignored. Monthly contracts went up by as much £0.65/MWh and seasonal contracts only displayed minor gains.

The gas curve saw bearish sentiment across the board this morning with Day-Ahead shedding 0.95ppt from its price. Linepack opened the session around 40mcm long on the back of stronger gas flows with Langeled increasing its output to 67mcm. Storage flows fell to 10mcm as Rough is the only facility currently in withdrawal mode, while both UK interconnectors are importing at a higher rate than yesterday. Power contracts took influence from their gas counterparts once again with Day-ahead falling by around £4.00/MWh as wind generation is expected to double tomorrow. Coal-fired generation now holds a larger share of the generation mix following the return of a unit at Fiddler's Ferry while a French interconnector was running at a low output this morning.

Market close data has revealed that the 1-year forward price for both commercial gas & commercial electricity went up - closing at 68.56ppt and £53.15/MWh, respectively. This can be seen in the graph below. 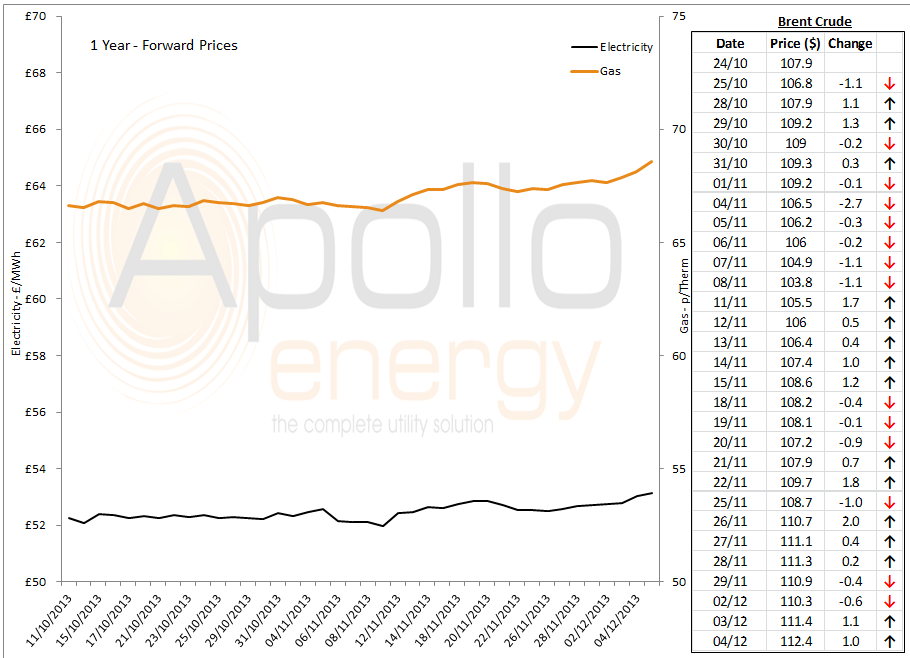 Brent 1st-nearby prices rose by $1.17/b yesterday to close at $112.8/b and WTI also increased, adding $2.22/b to end the session at $97/b. News in regards to the expansion of the Keystone XL Pipeline and a weak API2 crude stocks forecast have helped push prices higher.