Carbon prices helped to push power contracts much higher yesterday but have no bearing on prices today as the market waits for an update regarding backloading. Spot prices are currently taking a downward direction as relatively mild weather is expected over the coming days, while thermal and nuclear availability is also set to rise. Gas prices also moved down on the back of the milder weather forecast, meanwhile Norwegian output improved to offset lower storage withdrawals. UK LDZ demand is 1mcm lower than yesterday and an LNG delivery from Qatar is expected in mid-February, further losses are expected as a consequence. Today's prices can also be found in an easy to read table on our 'current UK energy price' page.

The gas curve ended the session with numerous losses despite most contracts strengthening in the morning. Day-Ahead shed 0.55ppt from its price as a much milder weather forecast countered a short UK gas system. Power contracts followed a similar trend to gas with Day-Ahead falling by £0.80/MWh and March-14 recording a loss of £0.30/MWh. Much higher wind generation was forecast for today which led to the price-drops, there is a chance wind production could surpass the record levels seen last week. Seasonal contracts also moved down with Summer-14 dropping by £0.45/MWh.

Gas prices fell this morning as the above average weather continues and demand levels remain low. Day-Ahead gas opened at a 1.20ppt discount with further help from storage levels which are 15% higher than this time last year; standing at 68% full. Flows via the Rough facility were at 40mcm while Langeled output edged back above 70mcm. Power contracts displayed significant losses and took influence from bearish gas. Day-Ahead was the only contract to register a gain as a 30% drop in wind generation is expected tomorrow. Front-Month APi2 coal decreased by $0.50/tn due to low demand and was also a factor in power prices plummeting.

Market close data has revealed that the 1-year forward price for both commercial gas & commercial electricity decreased- closing at 62.40ppt and £49.45/MWh, respectively. This can be seen in the graph below. 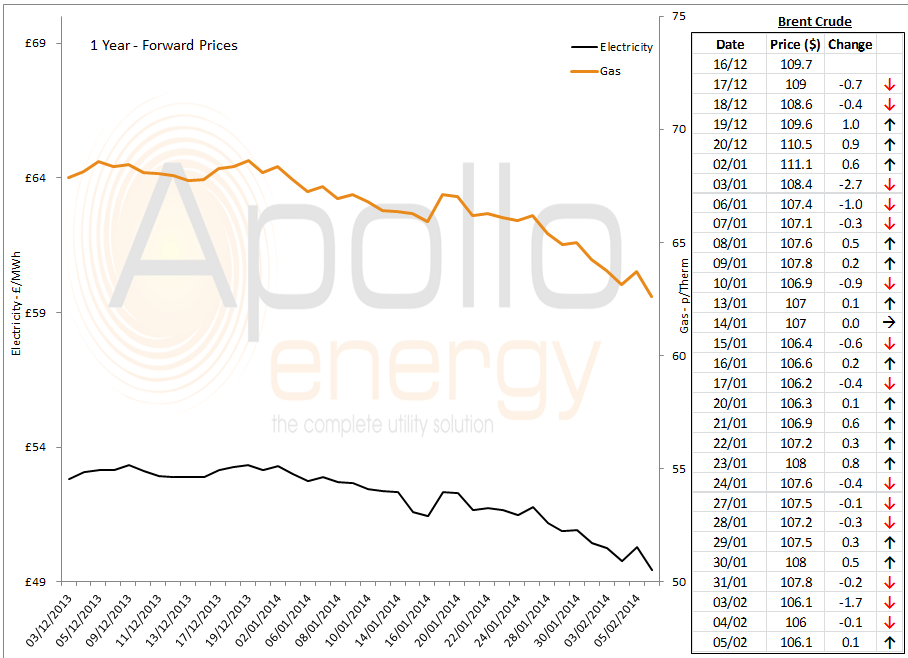 Brent 1st-nearby prices remained around $105.85/b throughout yesterday's session but climbed just over $106/b this morning. WTI rose by $0.76/b and the Brent/ WTI spread now stands at -$9/b.