Spot power prices remain high due to the current cold weather and low wind production. However wind generation is expected to improve in the coming days and milder temperatures are forecast for next week. As a result, this afternoon's outlook is stable but a further increase in the price of Brent and carbon could support the bulls. Overall gas supply was comfortable yesterday as an outage at the Kollsnes processing plant was resolved; this helped the majority of prices move down, despite strong demand. The UK gas system has opened short this morning as Norwegian flows have been re-routed into central Europe, pushing UK prices higher. Today's prices can also be found in an easy to read table on our 'current UK energy price' page.

Gas flows were much improved yesterday which led to a stable-to-bearish session with Day-Ahead falling by 3.30ppt. A milder weather forecast for next week also helped to weigh on prices and two scheduled LNG deliveries provided further bearish pressure. Power prices followed a similar trend to gas with the promise of milder weather offering support to the bears. Stronger Brent limited the losses further along the curve, while weak wind generation restricted the downward movement of the prompt contract.

Gas prices increased this morning with the UK gas system opening 10mcm short as overall gas flows fell by around 47mcm. A reduction in storage withdrawals was the main cause for this drop in supply, while Langeled flows were also 11mcm lower. Wind generation is set to fall by 1GW tomorrow which has helped Day-Ahead power add $0.50/MWh to its price. Next week's forecast of warmer weather has helped to restrict the upward movement of some contracts but price increases were still displayed across the curve. Meanwhile, strengthening APi2 coal offered support to seasonal contracts which also moved higher.

Market close data has revealed that the 1-year forward price for both commercial gas & commercial electricity increased - closing at 47.18ppt and £44.58/MWh, respectively. This can be seen in the graph below. 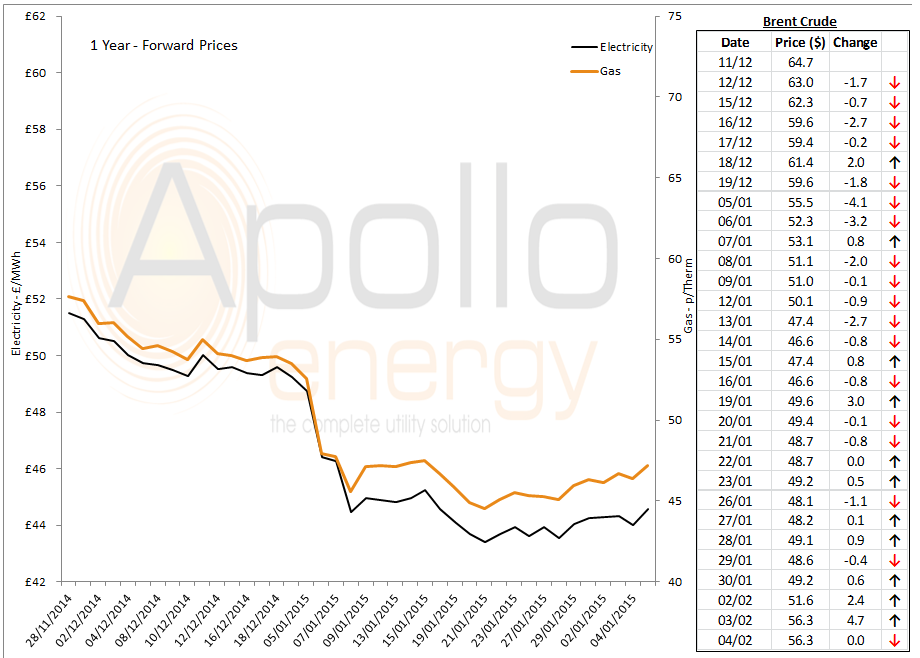 Brent 1st-nearby prices eased slightly this morning and remain just above $56/b following an increase of $10/b over the last two days which took prices to $59/b.