Front-Week and Month prices were higher today and there is no predicted trend for next week as pressure is expected to decline making it hard to foresee possible changes in the market. Yesterday saw a rise in European prices, low wind generation and especially low solar generation (-2GW) plus a drop in thermal production would explain the change in the German market, while demand in France was reported to be 2 GW higher than the previous day.

The system was oversupplied yesterday due to an increase in gas flows which led to Day-Ahead gas closing at 81.7ppt, a slight fall of 0.5ppt from opening. Front-Month dropped by 0.4ppt and Front-quarter saw a decrease of 0.35ppt even though there are concerns regarding the LNG supplies. A rise in the US on the far curve was not expected and Brent prices continue to plummet, dropping almost $4/bbl in the past 2 days due to the US unemployment situation and the current European economy. Day-Ahead power closed at the same price it opened at which was £58.1/MWh, high wind generation counteracted the drop off in nuclear output. Near curve prices saw a fall of £1/MWh which resulted in the seasonal contracts also showing a drop.

LNG availability decreased which saw prompt prices climb and the Day-Ahead contract saw the addition of the Monday demand premium which is a common occurrence. Rough will close on Saturday which will affect the prompt prices even more and the far curve saw W-13 rise 0.2ppt with an opening price of 74.15ppt. Day-Ahead power opened at £60.35 this morning an addition of £2.25/MWh day-on-day which was predominantly down to reduced Baseload coal generation because of maintenance carried out on nuclear and coal plants. W-13 opened at £57/MWh bounced back and AP12 coal grew higher going from $1/tn to an opening price of $82.5/tn.

Market close data has revealed that 1-year forward prices for commercial gas and commercial electricity both saw a drop - closing at 69.42ppt and £53.95 respectively. This can be seen in the graph below. 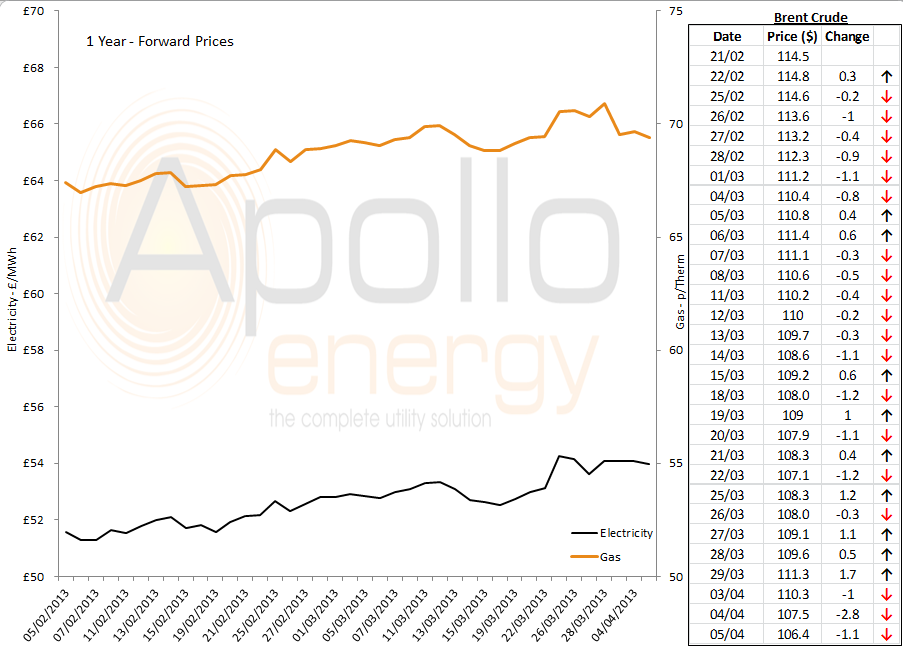 Brent prices continued to drop hitting a low of 105.29/$/b before jumping back to 106.5$/b, Gasoil prices also dropped further and timespreads became weaker. Poor Eurozone service PMIs, unemployment issues in the US and concerns in Asia regarding Bird Flu are today's main issues.