Spot power prices increased yesterday on the back of weaker nuclear and renewable generation. The usual drop in demand on Fridays and warmer weather failed to have much effect yesterday but should result in bullish movement today. Weaker demand levels on the back of warmer temperatures helped gas prices to move down yesterday, combined with stronger output from Norway. The UK gas system is short this morning due to a much improved supply/ demand picture and today's outlook is bearish. Today's prices can also be found in an easy to read table on our 'current UK energy price' page.

Movement on the gas curve was bearish on Thursday as lower demand levels resulted in a comfortable supply outlook. Flows remained healthy via South Hook, while output at Langeled and Vesterled also ramped up; resulting in losses across the curve. Power prices were more varied in their movement with front-month ignoring its gas counterpart to record a small gain, while seasonal contracts decreased. Wind generation was low at the start of the day but gradually rose to around 1.6GW later in the session, weighing on near-curve contracts.

Gas prices have decreased on the back of healthy fundamentals as warm weather and stronger Norwegian supply has resulted in a long UK gas system; supply levels were also comfortable elsewhere on the continent. Losses were observed on the power curve as a result of weaker gas and lower consumption. Day-Ahead was the exception to the downward movement as the UK is expected to be overcast at the weekend, resulting in weak solar generation, although warm weather should keep demand levels low.

Market close data has revealed that the 1-year forward price for both commercial gas & commercial electricity decreased - closing at 46.40ppt and £44.40/MWh, respectively. This can be seen in the graph below. 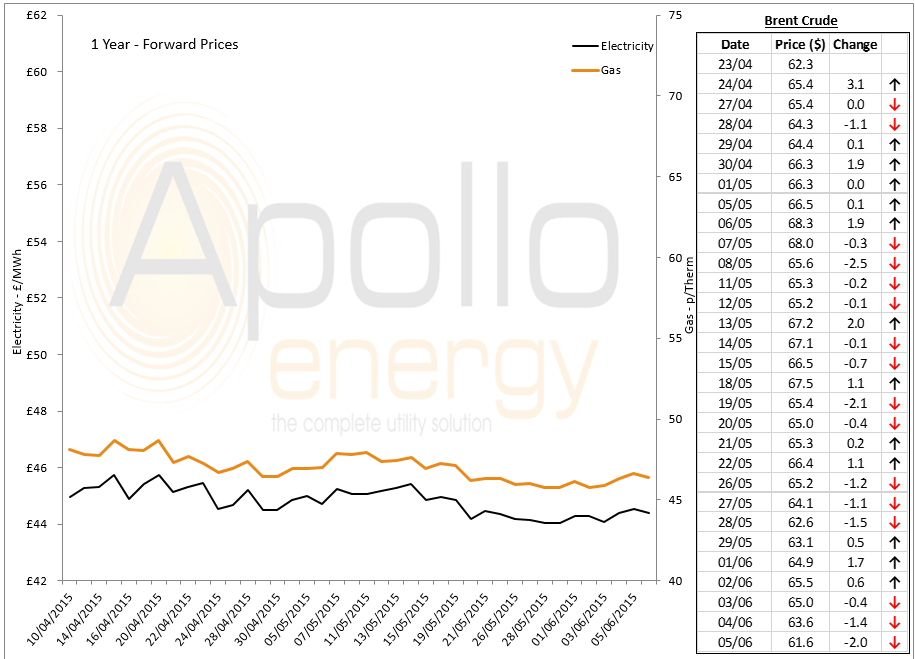 Brent 1st-nearby prices have displayed further losses, falling by nearly $2/b and now trade at $61.60/b. The market currently awaits a decision on OPEC production which could keep the market over-supplied and overnight trading was minimal.