Spot power prices displayed losses yesterday and were influenced by weakening gas and a fall in demand. A warmer weather forecast continues to have an effect this morning, although the losses are less prominent. Gas prices decreased yesterday as an uptick in temperatures resulted in a long gas system, assisted by low storage injections. The downward trend has continued this morning as demand levels have fallen further and another restriction on storage injections is expected tomorrow. Today's prices can also be found in an easy to read table on our 'current UK energy price' page.

Improved Norwegian flows helped to weigh on gas prices yesterday, while further downward pressure came from restrictions on storage injections. Despite the end of maintenance at the Rough storage facility following an outage, injections were still restricted by 2mcm until later in the afternoon. Capacity at Rough is also set to be cut on Thursday as Centrica have announced that they will switching to single train injections. Norwegian flows increased by 8mcm as repairs at the Nyhamna processing plant were completed. Power prices continued to move down on Tuesday as a result of weaker gas and a decrease in carbon emission certificate prices. Front-Month has fallen to its lowest level for 5 months, following a £0.20/MWh loss yesterday; decreasing by £4.50/MWh from the start of April. Long-term forecasts predict above average temperatures in the UK which helped near-curve prices close at a discount, ignoring weaker renewable and nuclear generation.

Further losses are evident on the gas curve this morning as the supply/ demand picture remains healthy despite a rise in storage injections, as warmer weather has reduced consumption levels. The scheduled arrival of three LNG deliveries over the next 7 days has also provided another bearish factor. Power prices have generally followed the movement of gas, with improved temperatures also having an effect. In terms of supply, the 610MW Heysham 2 unit 7 nuclear plant began refuelling yesterday, restricting output by between 346-389MW until the weekend as a result.

Market close data has revealed that the 1-year forward price for both commercial gas & commercial electricity decreased significantly - closing at 42.32ppt and £42.43/MWh, respectively. This can be seen in the graph below. 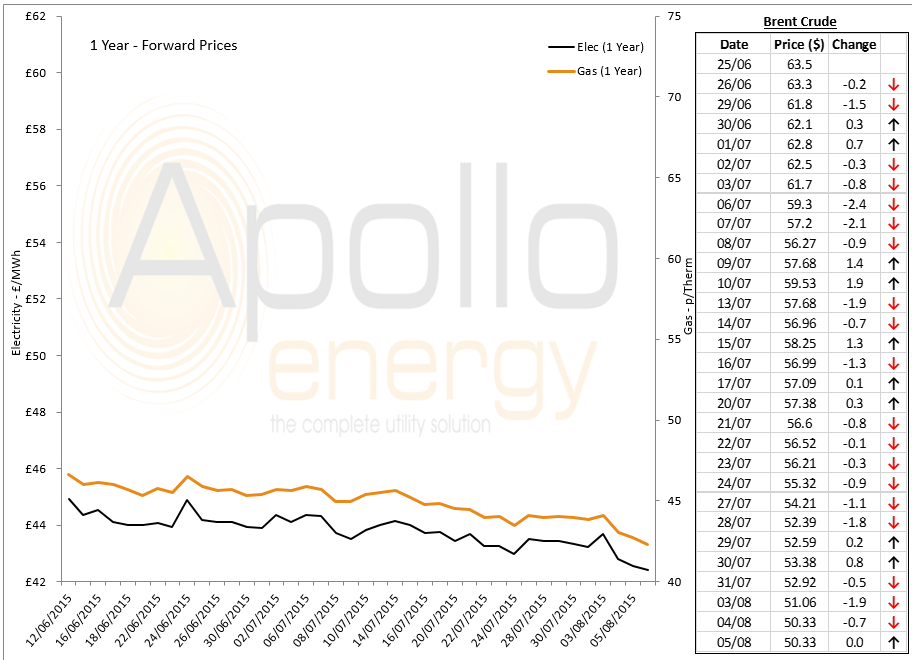 Brent 1st-nearby prices are stable this morning and have shown almost no change since yesterday as a stronger US Dollar and a fall in U.S. crude inventories offset a weak market.