Low wind generation continues to influence the spot market while supply levels are rising gradually and warmer weather has been forecast. On the gas market, demand is still relatively low but reduced flows via Langeled and the Bacton pipeline should give the curve a stable outlook. Energy Market Analysis - 05-09-2013 Today's prices can also be found in an easy to read table on our 'current UK energy price' page.

The system was long throughout yesterday's session despite the Theddlethorpe facility remaining offline following an outage on Tuesday. Prompt prices were bearish as a result of the long system with Day-Ahead and Front-Month decreasing by 0.10ppt. Further along the curve contracts took direction from weaker Brent prices and the strengthening UK pound; Summer-14 made the largest price drop and lost 0.25ppt. On the power curve Day-Ahead failed to take direction from lower gas prices and closed the session showing no change. Several power plants are expected to return online although this has been countered by the warmer weather which is expected to increase demand for air conditioning. Movement was also limited further along the curve as stronger carbon prices offset the losses made on the NBP.

Prompt prices were firm this morning due to the low flows via Langeled and Bacton pipelines while the LNG delivery is expected to arrive at South Hook today. Further along the curve seasonal contracts went up despite a decline in the wider fuels complex. Day-Ahead power fell by £0.55/MWh in anticipation of the usual drop in demand on Fridays while a 500MW gas-fired plant and 520MW nuclear plant are both expected to return this afternoon. The small gains witnessed on the gas curve meant Front-Month and seasonal contracts were either stable or went up slightly.

Market close data has revealed that the 1-year forward price for both commercial gas & commercial electricity made a gain - closing at 67.73ppt and £51.83/MWh, respectively. This can be seen in the graph below. 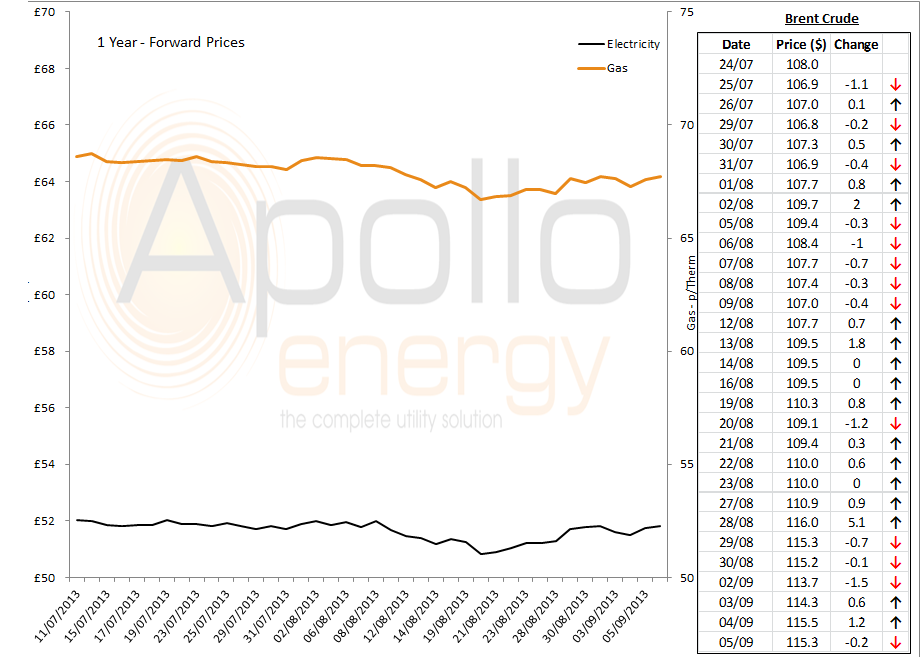 Brent 1st-nearby prices lost $0.77/b yesterday and closed the session at $114.9/b while WTI made a larger loss of $1.31/b. The US are moving closer to an attack on Syria following a senate meeting yesterday which was in favour of military movement which could have an effect on prices today. The latest API figures show crude inventories fell by 4.2Mb which was much more than anticipated.