Spot prices continued to move down yesterday despite 2.7GW of coal & lignite-fired generation being taken offline due to unexpected maintenance. However, the market remains well-supplied which helped prices remain bearish. Today improved wind generation and the return of conventional power units later in the afternoon should see prices make another loss. Gas prices took direction from ample supply levels yesterday despite a rise in demand as the residential sector has taken extra heating measures on the back of lower temperatures. An outage in Norway added support to prices earlier in the session but strong flows via the BBL pipeline and South Hook restricted any bullish movement. Today UK LDZ demand is similar to yesterday's levels although temperatures remain below average, meanwhile supply levels remain healthy which should help contracts hold their price. Today's prices can also be found in an easy to read table on our 'current UK energy price' page.

The majority of gas contracts closed at a discount yesterday with Day-Ahead making the largest price-drop of 0.70ppt. Healthy gas flows at a number of facilities were the main cause for the bearish movement. The far-curve was influenced by Brent prices which continue to fall while a weaker Dollar also helped contracts move down. The power curve followed its gas counterpart closely except for a few seasonal contracts which showed practically no change. Brent was also one of the main drivers in the power market while the system buy price climbed to £343/MWh as extra dependence on oil plants was required to meet demand.

Gas prices increased across the curve this morning with Day-Ahead rising by 1ppt and monthly contracts registering gains of up to 0.30ppt. Demand levels increased by 50mcm to 250mcm and gas flows were slightly weaker than yesterday. Langeled flows fell to 56mcm due to unexpected outages after reaching levels of 70mcm yesterday, while BBL's output dropped to 30mcm. LNG was the only facility that processed flows that could be considered healthy. Only a few seasonal contracts were being traded this morning but on the near-curve Day-ahead managed to climb £0.45/MWh higher and smaller gains were seen further along the curve. Wind generation has fallen by 33GW today despite being forecast to improve and as a result wind now holds just 5% of the fuel mix.

Market close data has revealed that the 1-year forward price for both commercial gas & commercial electricity decreased - closing at 66.65ppt and £52.15/MWh, respectively. This can be seen in the graph below. 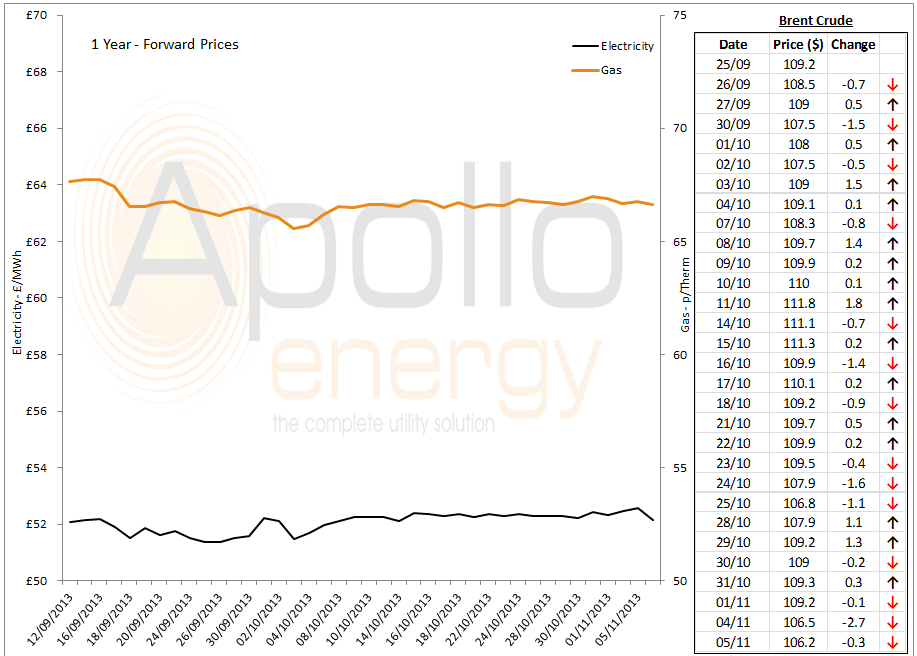 Brent continues to trade around $106/b which is close to a four-month low after making a series of losses late last week. The Brent/ WTI spread has displayed no movement this morning and remains at $11.5/b. In other news, disorder in Libya could affect the oil market as one of the country's main oilfields has yet to return online following protests nearby.