Spot power prices increased due to low wind generation and a drop in temperatures which has pushed demand levels higher. A bearish session is expected today as gas and fuel prices are weaker and supply levels are healthy. Gas prices also moved higher due to the increase in demand, although above average temperatures are set to return at the weekend. UK LDZ demand is expected to be higher once again today but stronger supply has offset this rise in consumption; price-drops are expected this afternoon as a result. Today's prices can also be found in an easy to read table on our 'current UK energy price' page.

Gas contracts were bullish on Tuesday despite improved supply levels, as colder weather resulted in higher consumption. Gains were slightly restricted further out as above average temperatures were expected to return at the weekend, while the overall supply picture was also healthy. Day-Ahead power climbed higher yesterday as wind generation levels remained low and demand levels continued to tick higher. Gains were observed across the curve with contracts on the far-curve failing to take direction from weakened fuel prices.

Day-Ahead gas shed from its price as a revised weather forecast predicts colder weather until the end of the working week, at least. The UK gas system opened 9mcm short as demand levels have grown. However, Norwegian output has climbed to 74mcm, while gas flows were relatively unchanged elsewhere. Further along the curve the majority of prices fell lower as a result of weakening Brent. On the power curve Day-Ahead plummeted as wind generation is expected to increase tomorrow and peak demand levels are set to fall. Peak wind generation is at 2.5GW today but these levels are predicted to rise to 6.3GW tomorrow. Further out most contracts took direction from their gas counterparts and decreased in value.

Market close data has revealed that the 1-year forward price for commercial gas showed no change, while commercial electricity moved down - closing at 55.08ppt and £50.20/MWh, respectively. This can be seen in the graph below. 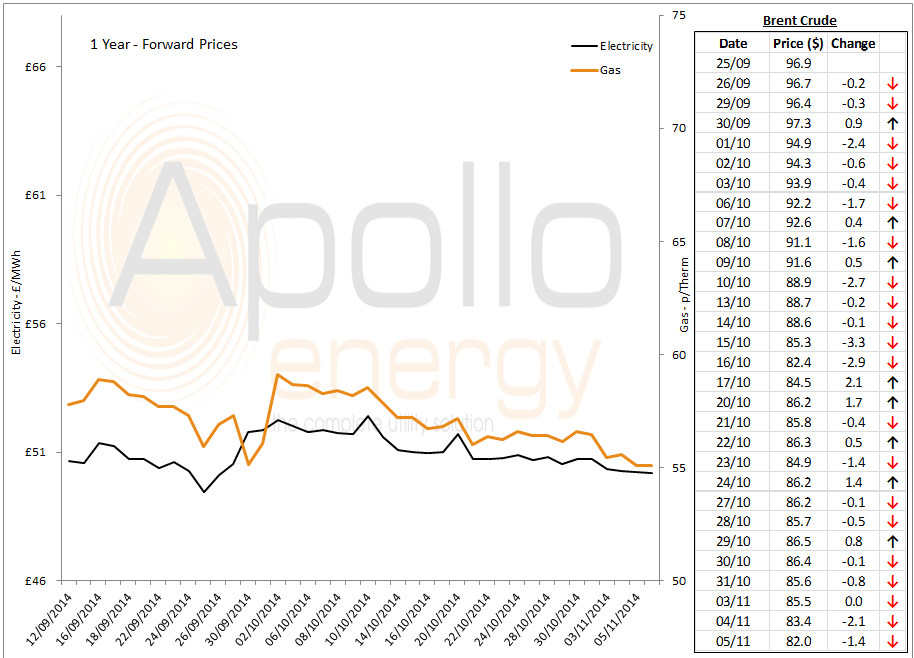 Brent 1st-nearby prices recorded a loss for a fifth successive day as the current bearish trend looks set to continue over November. Saudi Arabia's revised oil prices continue to be the main market driver and further losses are expected.