Spot prices decreased yesterday as wind generation improved significantly, although the current figure has been forecast to halve on Friday which could push prices higher today. Gas prices fell yesterday as Norwegian flows ramped up and temperatures for the next few days will be higher than originally forecast, helping towards a well-supplied system. Today UK LDZ demand is 11mcm higher and interconnector flows into the UK stopped at the start of the session. However the UK gas system is currently healthy and Langeled flows are at their maximum so gas prices could register another loss. Today's prices can also be found in an easy to read table on our 'current UK energy price' page.

Day-Ahead gas fell by 0.70ppt in yesterday's session despite the UK gas system tightening to 3mcm long. Rough and South Hooks flows were almost at 0mcm by the end of the day although the outages in Norway were resolved. The rest of the curve displayed losses by as much as 0.75ppt and took influence from falling Brent. The power curve also made numerous losses but the price-drops were less significant than the ones made by gas. Day-Ahead decreased by 0.30/MWh and January-14 closed the session £0.05/MWh lower. An increase in wind production resulted in reduced gas-fired generation although the French interconnector was still experiencing low output.

The UK gas system opened 27mcm long which helped Day-Ahead make a 0.10ppt loss. Near-curve contracts saw numerous losses of up to 0.30ppt. Movement varied further along the curve although the bulls were more dominant. In terms of power, contracts on the near-curve took direction from gas except Day-Ahead which rallied £1.40/MWh higher as the current wind levels are expected to drop by 50% tomorrow. On the far-curve movement was rather subdued with Summer-14 opening the session unchanged. APi2 coal started the day with a $0.60/tn discount due to concerns over Columbian supply disruptions.

Market close data has revealed that the 1-year forward price for both commercial gas & commercial electricity decreased - closing at 68.36ppt and £53.13/MWh, respectively. This can be seen in the graph below. 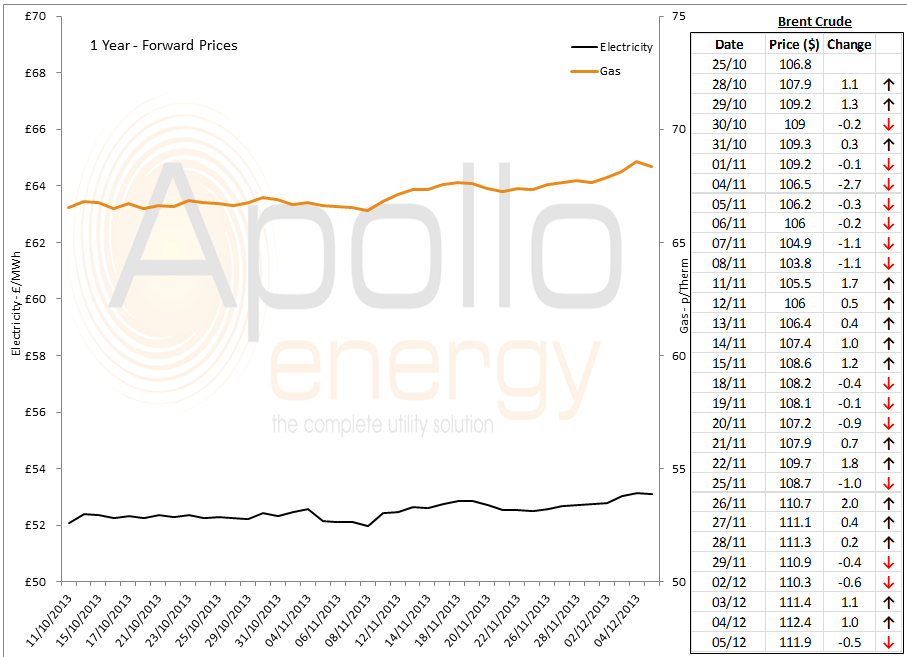 Brent 1st-nearby prices fell yesterday following the OPEC's decision to keep the 30Mb/d output cap in place for the next 6 months. A Bullish EIA report helped WTI move higher and the Brent/ WTI spread has now narrowed to -$14/b.