Spot power prices remain low due to healthy wind production and increased nuclear availability. Prices have fallen to their lowest point in December so far and further losses could occur this afternoon. Gas prices moved down on Thursday despite displaying some upward movement at the opening of the session. The UK gas system was well-supplied throughout the day as demand levels were 20% below the seasonal average. Milder weather is expected to continue over the weekend which will reduce demand and a stable-to-bearish outlook is expected for today.

Gas prices received support from the colder weather which is set to creep in at the end of the month, as well as an outage at a Norwegian pipeline. However, the upward movement was restricted by healthy storage levels. Day-Ahead power ended yesterday's session with a loss as wind generation was expected to remain high today. Downward movement was also observed further along the curve although an expected drop in temperatures at the turn of the year offered support to some far-curve contracts.

Gas prices weakened this morning as the system opened 14mcm long as overall gas flows increased by 20mcm day-on-day. Gas storage levels currently stand at 83% but there are no withdrawals scheduled as it stands. Meanwhile, two LNG deliveries are expected to arrive in the UK over the weekend. A number of power plants are set to return online today which has helped the Day-Ahead contract shed £0.25/MWh from its price. Further influence was also provided by strong wind generation which is forecast to remain above 8GW over the weekend.

Market close data has revealed that the 1-year forward price for both commercial gas & commercial electricity decreased - closing at 52.60ppt and £48.75/MWh, respectively. This can be seen in the graph below. 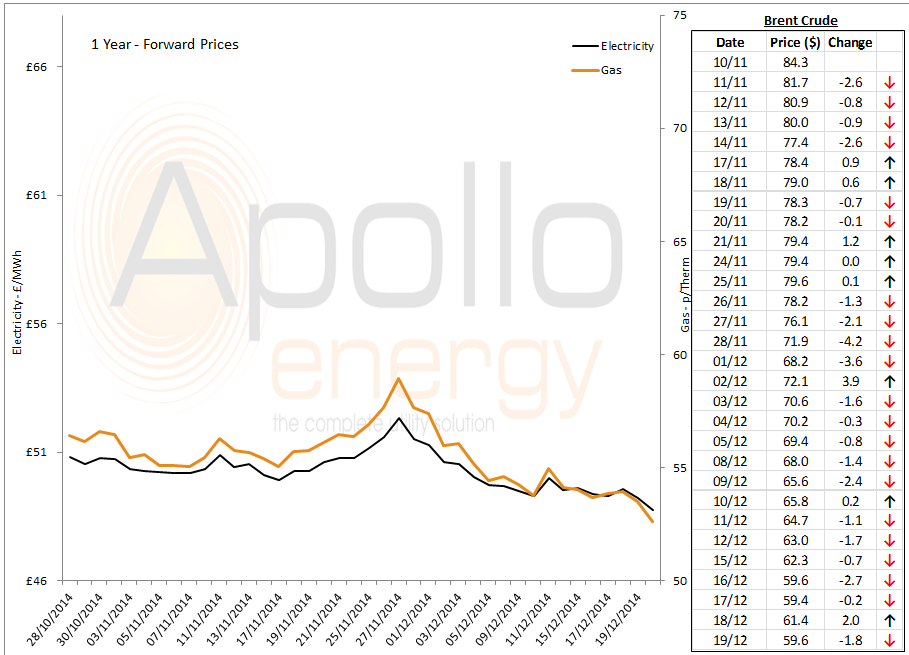 Brent 1st-nearby prices displayed a sizeable gain yesterday but have fallen back below $60/b this morning. The cuts being made by OPEC continue to drive the market with some oil producers claiming the industry is currently unprofitable.