Spot power prices were relatively firm yesterday as strong wind generation was offset by numerous nuclear outages. Meanwhile, an announcement is expected today in regards to the carbon backloading proposal and if officials vote in favour of the initiative prices are expected to climb higher. Gas prices recorded further losses yesterday as temperatures are expected to remain above average until mid-February at least. However the UK gas system was slightly short despite lower demand levels as there was a drop in Norwegian output. Today UK LDZ demand is 9mcm lower although an outage at a Norwegian gas facility continues to affect exports to the UK; prices are expected to move higher as a result. Today's prices can also be found in an easy to read table on our 'current UK energy price' page.

Gas prices strengthened yesterday with Front-Quarter rising by 0.80ppt and Summer-16 adding 1.15ppt to its price. Day-ahead also moved higher and displayed a 0.60ppt gain on the back of a revised weather forecast for next week. Langeled flows decreased slightly following an outage at a gas field which also offered support to prices. The power curve displayed upward movement and took influence from gas contracts; Day-Ahead rose by £0.35/MWh despite healthy wind generation. Further along the curve Summer-15 and Winter-15 registered minor losses while the market continued to wait on the carbon backloading outcome.

Bullish sentiment was displayed across the gas curve this morning except for a few quarterly contracts. Day-Ahead opened at a 0.50ppt premium as the UK gas system opened 19mcm short, with reduced flows from Langeled due to yesterday's outage. Storage withdrawals were increased in an attempt to make up the deficit and the Rough facility increased its output to 46mcm. Power contracts also followed an upward trend with Day-Ahead increasing by £1.15/MWh and monthly contracts displaying gains as high as £0.50/MWh. The far-curve climbed higher but the gains were less prominent as Summer-14 rose by just £0.05/MWh. Prices received support from a lower wind generation forecast which has held a large share of the generation mix over the last few days.

Market close data has revealed that the 1-year forward price for both commercial gas & commercial electricity moved higher- closing at 63.14ppt and £49.88/MWh, respectively. This can be seen in the graph below. 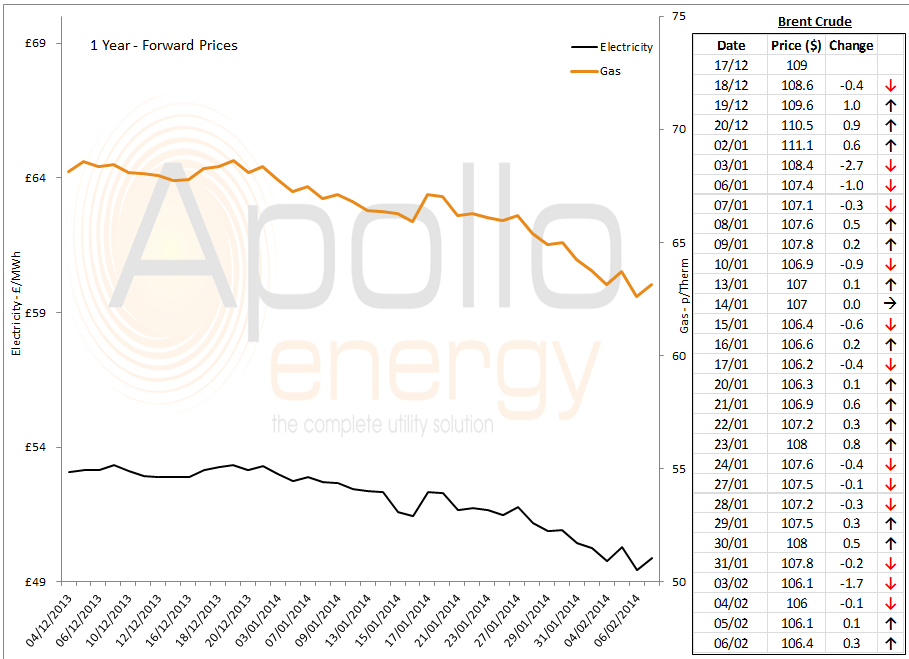 Brent 1st-nearby prices remain above $106/b this morning and WTI has also increased as colder weather in the US has resulted in higher demand levels.