How did the energy markets close? The curved opened high on Friday but eventually dropped and the system continued to stay long throughout the day. The Rough gas facility's storage operator announced that 100mcm could still be withdrawn despite levels being almost zero which had a bearish effect on prompt prices. Day-Ahead  power made up £1.65/MWh   with wind generation expected to be low over the weekend and a higher dependency on gas fired generation predicted, the front 3 seasons showed a minor loss. A number of nuclear reactors are likely to be running at a lower output or be taken offline completely at the start of the week, 2 of these reactors are at the UK's Heysham power plant.

How did the energy markets open? Gas prices dropped further today because of an oversupplied system, Day-Ahead opened just under 70.00ppt with May-13 falling by 0.75ppt. Langeled flows jumped back above 70mcm, Linepack opened at around 50mcm long and LNG opened at 25mcm with storage stocks falling sharply to below 30mcm. Day-Ahead power opened £5.00/MWh down as power prices showed a similar drop to gas, wind generation also saw a drop and only made up 3% of the fuel mix. Summer contracts were higher at opening but changes varied amongst the curve contracts. 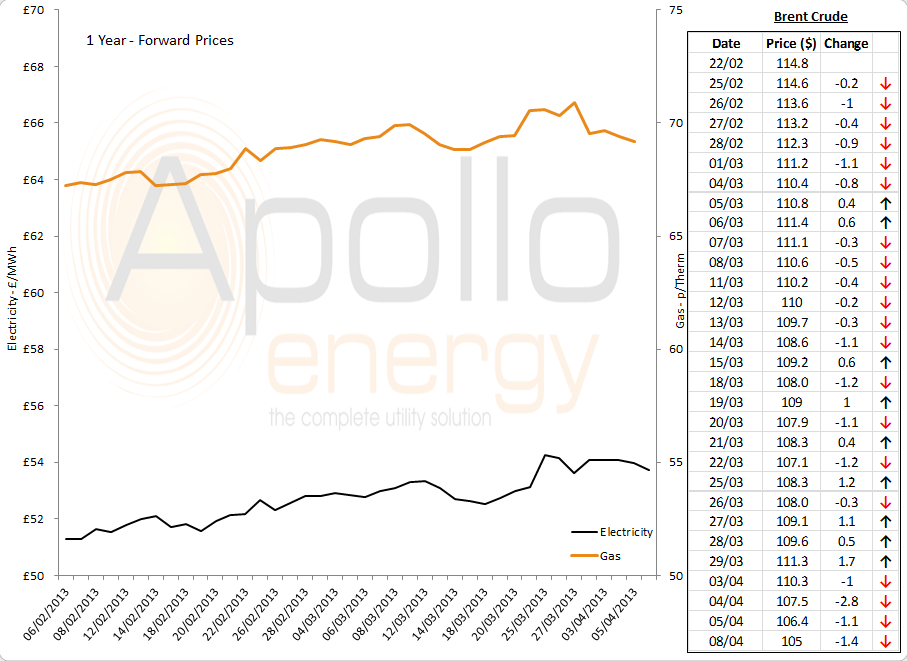 Latest Brent Crude Oil prices Brent prices continued to fall and hit a low point of 103.62 $/b on Friday, Brent and gasoil timespreads became weaker and Brent/WTI May13 dropped to 11.2 $/b at one point. The US unemployment issues remain one of the main issues at present in regards to Brent prices and a possible strike in Norway was avoided after the acceptance of a wage deal by the unions. Output will increase next month at the Brent-Forties-Oseberg-Ekofisk complex and industrial output in Germany today is expected to go up due to stronger orders.