Spot power prices increased yesterday afternoon on the back of rising oil prices but overall fundamentals are generally bearish, as generation levels are healthy following improved nuclear availability. Gas prices also displayed a rebound yesterday as an outage in Norway restricted imports into the UK and led to an undersupplied system, despite weaker demand levels. Temperatures are forecast to decrease tomorrow and the UK gas system remains short today resulting in a bullish outlook for this afternoon. Today's prices can also be found in an easy to read table on our 'current UK energy price' page.

A short UK gas system pushed prices higher yesterday afternoon with the largest increases displayed on the near-curve. This undersupply was a result of a planned outage at the Troll gas facility and zero output via the BBL pipeline. Further along the curve the main market driver was strengthening oil and the majority of contracts displayed gains. Power prices were also bullish on Tuesday with the exception of the Day-Ahead contract which fell on the back of improved wind generation. Seasonal contracts followed their gas counterparts and rallied higher, although weaker coal restricted some gains on the far-curve.

The system remains under-supplied this morning as Norwegian flows continue at a reduced rate. Meanwhile, below average temperatures are forecast for the rest of the week and this has resulted in upward movement across the gas curve. Near-curve power prices have moved higher as a result of stronger gas, while contracts on the far-curve have been supported by rising oil. A colder weather outlook has also outweighed improving generation levels.

Market close data has revealed that the 1-year forward price for both commercial gas & commercial electricity increased - closing at 47.90ppt and £45.25/MWh, respectively. This can be seen in the graph below. 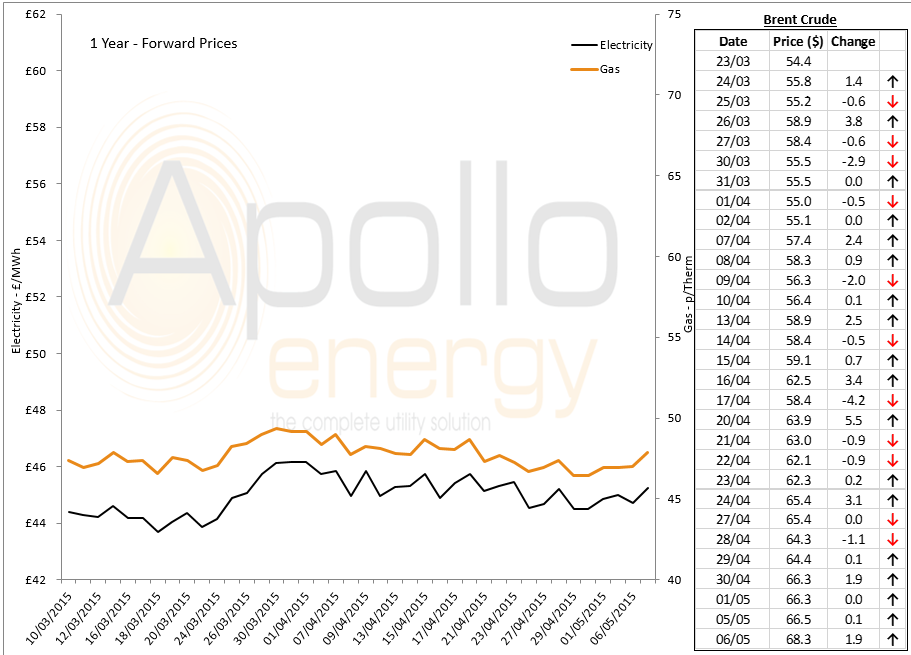 Brent 1st-nearby prices are following a bullish trend at present and rose by over $2/b to reach their highest levels in 2015, so far. A combination of a weaker US Dollar, disruptions to Libyan oil production and the Saudi Arabian airstrikes in Yemen have provided support.