Spot power prices decreased yesterday with weaker gas and oil the main market drivers. Lower renewable generation has resulted in gains on the near-curve this morning, although falling Brent has restricted upward movement further out. Gas prices moved down on Wednesday as Norwegian supply levels displayed an increase and the LNG outlook was healthy. Today's outlook is generally bullish with an uptick in demand levels and a drop in supply levels across Europe providing support. Today's prices can also be found in an easy to read table on our 'current UK energy price' page.

Gas prices decreased yesterday for the third session in a row following improved Norwegian supply and higher LNG send-outs. Norwegian imports increased by 8mcm compared to Tuesday's levels, while LNG send-outs rose from 24mcm to 29mcm. The LNG outlook is currently healthy with two deliveries expected to arrive at South Hook in the next 5 days. Improved supply was slightly offset by a 20mcm rise in demand levels which reached 170mcm. The power curve displayed numerous losses with weakening oil continuing to weigh on far-curve contracts. Meanwhile, another drop in EU ETS emissions certificates helped some near-curve contracts to shed from their price, although stronger coal helped Front-Month to end the session unchanged. Day-Ahead was also an exception to the losses and instead received support from a weaker wind generation forecast; adding £0.75/MWh to its price.

Gas prices have moved higher this morning despite falling Brent, with influence coming from a rise in demand. UK prices were also dictated by movement on the continent with a drop in Norwegian imports resulting in a short system and with strong demand in Holland, due to increased storage injections. Power prices also displayed a decrease today, influenced by their weaker gas counterparts and lower renewable generation, with another drop in wind production expected tomorrow. However, another sharp drop in oil helped to restrict some of the upward movement further along the curve.

Market close data has revealed that the 1-year forward price for both commercial gas & commercial electricity increased - closing at 42.69ppt and £42.45/MWh, respectively. This can be seen in the graph below. 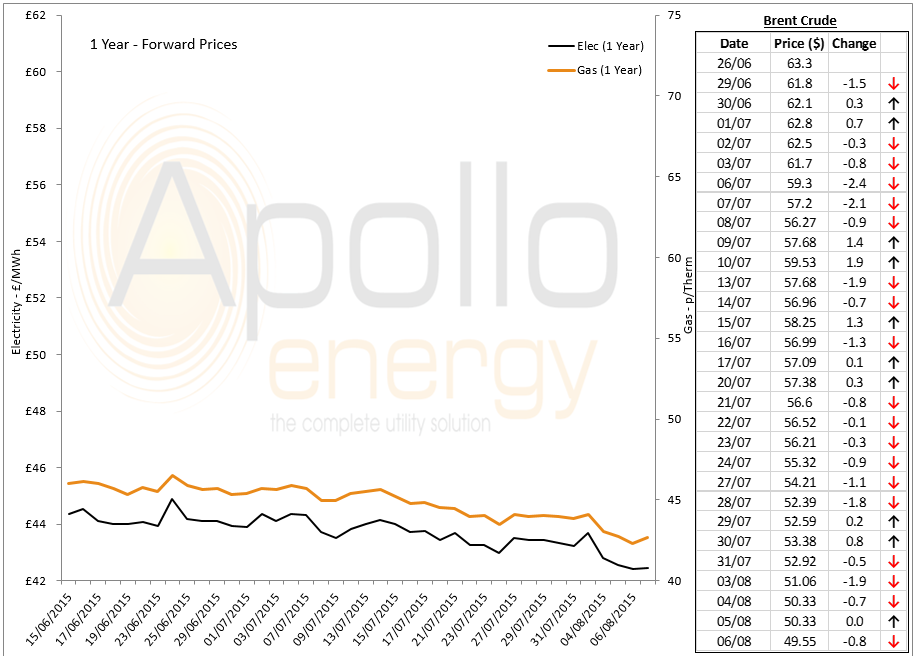 Brent 1st-nearby prices have recorded another loss and have dropped below $50/b; prices have fallen by more than 19% in the last month.