On the spot marker the cooler weather forecast has been offset by a rise in wind generation which should help contracts stabilise. On the UK gas market supply levels have improved this morning thanks to higher flows from the Theddlethorpe facility which should see October 2013 prices move down. Today's prices can also be found in an easy to read table on our 'current UK energy price' page.

Day-Ahead gas went up by 0.20ppt and closed at 64.80ppt due to increased demand and a drop in temperatures. Front-Month also made a gain but the rest of the curve was rather flat except seasonal prices which made losses. On the power curve, seasonal contracts saw only minor movement by the end of the session and ignored the significant gains seen on the carbon allowance market and APi2 coal market. Winter-13 and Summer-14 held firm yesterday as higher wind generation was countered by an increase in demand. Day-Ahead closed at £47/MWh and saw no change while the IFA interconnector which links the UK and France returned to full capacity yesterday.

Gas contracts rose this morning with Day-Ahead adding 0.70ppt to its price due to the decrease in flows via the Bacton BBL pipeline and the scheduled maintenance at the Karsto facility. The gains seen further along the curve were less significant and ranged between 0.05ppt and 0.20ppt. Day-Ahead power opened at a £1.50/MWh premium and took influence from stronger gas contracts. The rest of the curve also saw gains along with Front-Month APi2 coal and EUAs which both went up by $0.15/tn. Stronger Brent prices also helped the curve make gains although the return of several plants restricted the gains somewhat.

Market close data has revealed that the 1-year forward price for commercial gas made a loss while commercial electricity went up - closing at 67.70ppt and £51.98/MWh, respectively. This can be seen in the graph below. 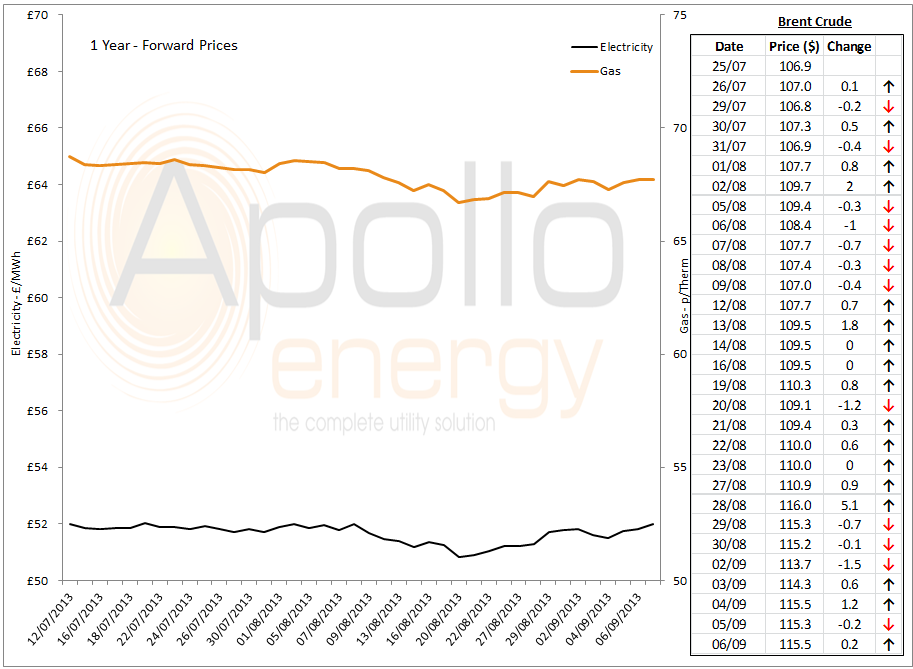 Brent 1st-nearby prices made a small gain and closed yesterday's session just above $115/b with WTI falling by $0.43/b. The main focus for today on the oil market is the US employment report which will be released this afternoon as well as the on-going situation in Syria.