Spot power prices were pushed higher yesterday as temperatures are expected to turn colder later in the week, while nuclear and thermal availability is also expected to drop temporarily due to additional maintenance; further support was also provided by stronger gas, oil and coal.

Gas prices displayed a rebound yesterday as an expected rise in demand at the end of the week and rising Brent provided upward pressure. Temperatures for October were revised lower this morning which could support contracts further out. However, the current mild weather is expected to last till Thursday and demand is currently 9% below the seasonal norm as exports to Belgium have also decreased; near-curve prices have moved down as a result.

Contracts on the power curve also moved higher on Monday, with stronger gas and carbon emission contracts offering support. A colder weather forecast also affected the curve with temperatures in London set to fall below 6 °C at the end of the week.

Near-curve gas prices have opened lower this morning as demand levels remain well below average as temperatures in the UK are still above the seasonal norm and exports to Belgium are lower. Further out, prices have found support from strengthening Brent which has posted a gain for the second session in a row.

Power prices displayed similar movement to their gas counterparts, with mild weather helping the prompt to decrease. Like gas, upward movement is evident further along the curve as an expected rise in demand and stronger fuel prices dictated the market.

Market close data has revealed that the 1-year forward price for commercial gas was unchanged, while commercial electricity decreased slightly - closing at 41.05ppt and £42.18/MWh, respectively. This can be seen in the graph below. 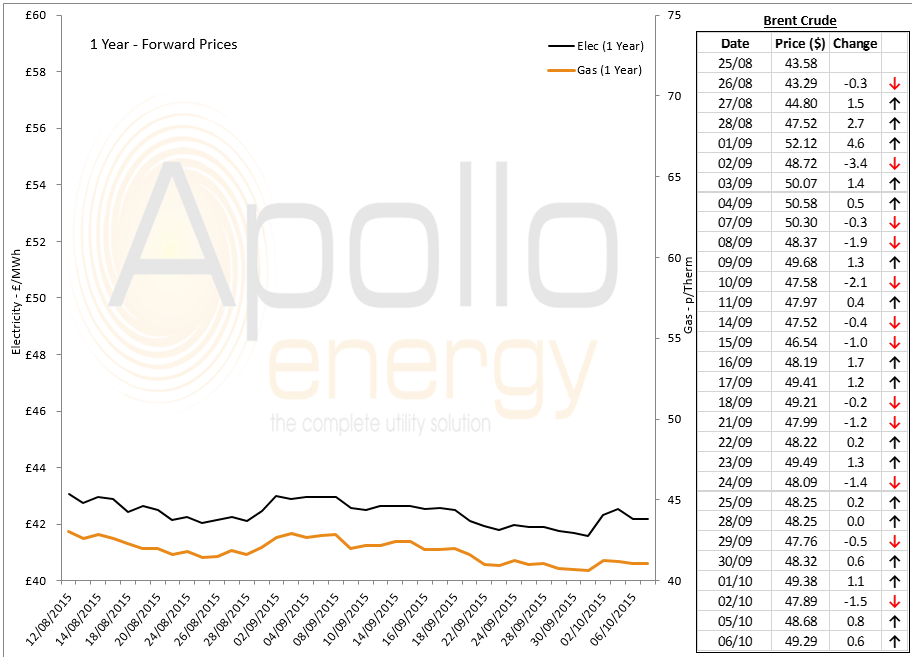 Brent 1st-nearby prices moved higher on Monday as fundamentals were generally unchanged, although an expected rise in US crude stocks limited the gains somewhat; Brent trades at around $49.3/b this morning.