Healthy wind generation and ample thermal capacities have helped spot prices remain bearish. Slightly milder weather is also expected for the next week or so which should help lower demand levels and support the bears. NBP prices saw an increase yesterday as demand levels rose above the seasonal average. Prices were also supported by scheduled maintenance at a Norwegian gas facility this morning which has restricted 50mcm from the system. UK LDZ demand has fallen by 13mcm today and despite Norwegian maintenance the system remains well-supplied which should see contracts hold firm. Today's prices can also be found in an easy to read table on our 'current UK energy price' page.

Day-Ahead gas increased by 0.40ppt on the back of colder temperatures yesterday which in turn led to higher demand. Near-curve prices ignored healthy supply levels and a system which was close to balanced. Langeled flows were flowing at a rate of 60mcm but this should decrease in the coming days as Norwegian maintenance began this morning. The power curve showed mixed movement with Day-Ahead failing to register any change, closing the session at £51.85/MWh. Steady demand levels help Day-Ahead retain its price while Front-Month moved higher and seasonal contracts fell by as much as £0.15/MWh

Weaker front-month Brent helped near-curve gas prices make losses while linepack opened at 18mcm long, also adding to the bearish sentiment. The Bacton interconnector reverted to import mode for the first time since April and withdrawals were made at the Rough storage facility. The power curve also opened at a discount except for the front-month contracts, lower commodity prices are thought to have impacted prices. Day-Ahead shed £1.50/MWh from its price as wind generation increased its share of the fuel mix to 9%.   December-13 APi2 coal saw a drop of $2.50/tn and cancelled out any gains made at the start of the week.

Market close data has revealed that the 1-year forward price for both commercial gas & commercial electricity decreased - closing at 66.60ppt and £52.13/MWh, respectively. This can be seen in the graph below. 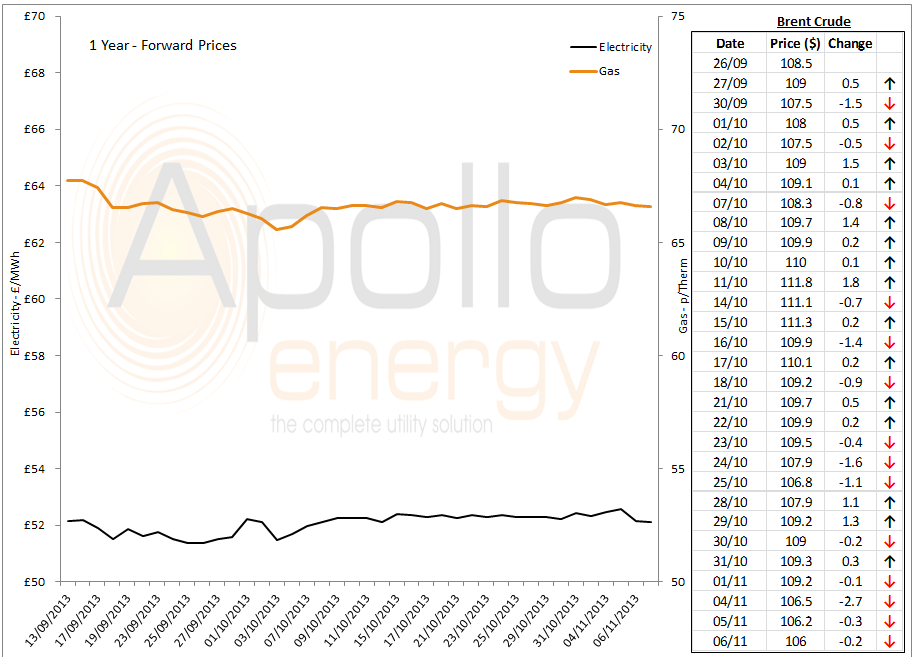 Brent 1st-nearby prices fell by $0.90/b yesterday in a rather uneventful day, although prices have rebounded slightly this morning and now stand at $106/b. A decline in products stocks level forecasts is thought to be the main driver of prices this morning while WTI has also made a small gain taking the spread to -$12/b.