Spot prices fell yesterday on the back of strong wind generation levels, while prices on the far-curve moved up slightly due to rising clean coal and carbon contracts. Gas prices increased during yesterday's session as temperatures on Friday were expected to be colder than originally forecast, which should lead to higher demand levels. Today UK LDZ demand is 3mcm higher while Norwegian flows are reasonably stable. However flows coming into the UK via both interconnectors were at zero and additional storage withdrawals were required. Meanwhile temperatures are expected to be milder over the weekend so gas prices could turn bearish. Today's prices can also be found in an easy to read table on our 'current UK energy price' page.

Prices across the gas curve climbed higher by Thursday's close with Day-Ahead adding 0.55ppt as colder temperatures were expected today, despite a milder forecast a few days ago. Further along the curve the gains were less prominent and ranged from a 0.05ppt gain for Q2-14 to a 0.35ppt increase for Winter-14; stronger Brent was the main driver of prices on Thursday. Day-Ahead power was unchanged at the end of yesterday's session, however the rest of the curve took direction from their gas counterparts; Summer-16 was the exception to this which fell by £0.15/MWh. Front-Month APi2 coal moved $0.10/tn higher as Columbian supply concerns continue to affect the market.

The gas curve displayed numerous losses this morning with Day-Ahead falling by 0.30ppt as milder temperatures are expected over the weekend and the start of next week. The price-drops on the far-curve ranged between 0.05ppt for Summer-14 and 0.25ppt for Winter-14, taking direction from slightly weaker Brent. On the power, Day-Ahead ignored the return of several power plants and registered a gain of £0.25/MWh. The rest of the curve saw mixed movement although most contracts took direction from gas, Front-Month decreased by £0.25/MWh while Front-Season opened at a £0.10/MWh premium.

Market close data has revealed that the 1-year forward price for both commercial gas & commercial electricity decreased - closing at 68.45ppt and £53.33/MWh, respectively. This can be seen in the graph below. 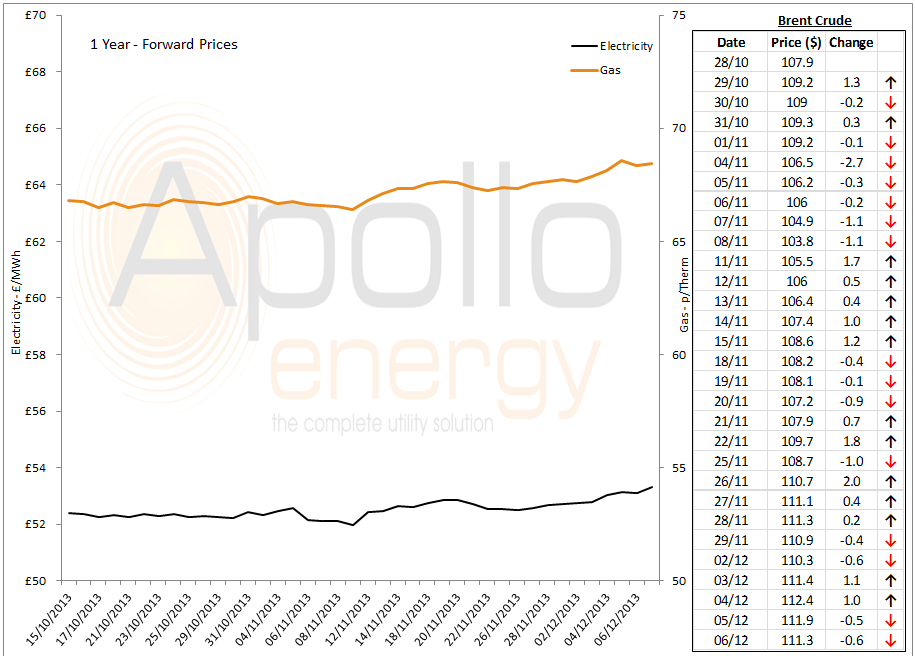 Brent-1st nearby prices lost $0.90/b yesterday, decreasing for the second day running; however prices have ebbed back above $111/b this morning.