Temperatures are expected to drop slightly on Thursday which should lead to a rise in consumption, French nuclear and hydro production remains healthy but spot prices are expected to rise tomorrow. Gas prices increased yesterday as fundamentals in general weakened despite the mild weather. The UK gas system was short as Langeled flows fell to 60mcm which helped push prices higher. Temperatures are expected to drop to the seasonal average as the week goes on however the system opened long this morning as Langeled and BBL flows ramped up; prices should hold firm as a result. Today's prices can also be found in an easy to read table on our 'current UK energy price' page.

The gas curve displayed numerous price-drops yesterday as the UK gas system became balanced after originally opening short. Lower demand and an increase in Langeled flows which saw them climb to 72mcm supported the bearish tension. Day-Ahead power fell by £0.25/MWh as strong wind generation levels continued to affect the curve. Contracts further along the curve moved down and took influence from gas prices; meanwhile a nuclear power plant is expected to remain offline until the end of the week.

The gas curve displayed mixed movement this morning with Day-Ahead rising by 0.40ppt and Front-Month falling by 0.10ppt. Langeled flows remained around 72mcm while the BBL interconnector also saw an improved rate. Storage facilities are still in injection mode due to the lower demand levels over the holidays; storage levels are currently 4% higher than they were the same time last year. On the power curve, Day-Ahead rose by £1.30/MWh as wind production is expected to halve tomorrow and more expensive gas-fired generation will make up the deficit. Front-Month and Front-Quarter both opened at a discount while seasonal contracts moved higher due to stronger Brent.

Market close data has revealed that the 1-year forward price for both commercial gas & commercial electricity climbed higher - closing at 66.95ppt and £52.70/MWh, respectively. This can be seen in the graph below. 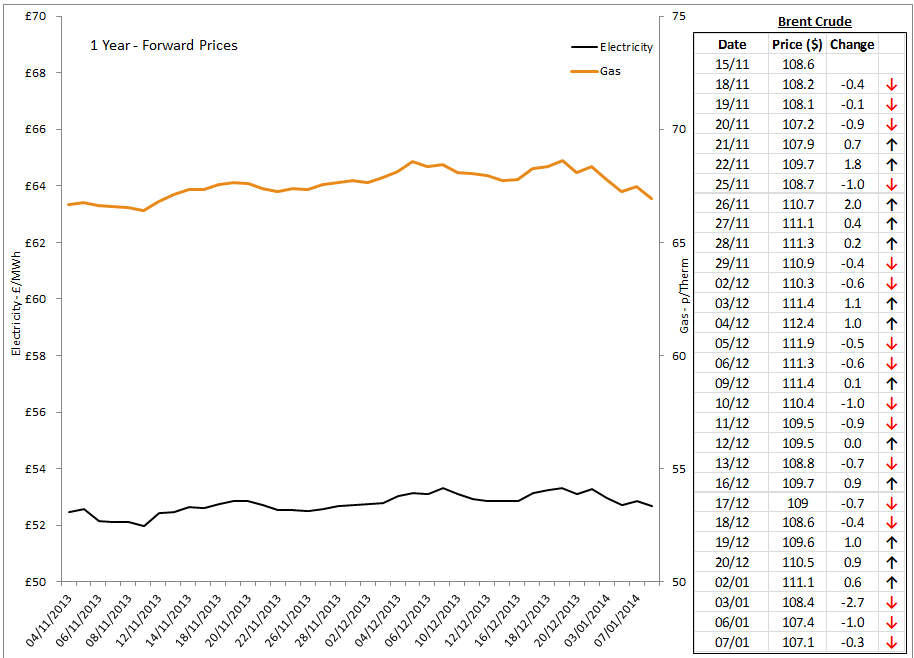 Brent 1st-nearby prices fluctuated yesterday but ended the session with a $0.16/b loss, opening today's session around $107/b.