Spot prices recorded sizeable losses yesterday on the back of a milder weather forecast and the usual drop in demand on Fridays. Supply levels were also healthy and wind generation was strong, adding further bearish pressure. This morning prices went up as the EU parliament approved the backloading proposal which will see large quantities of carbon withheld from the market, however a correction in prices is expected today and contracts should move down. Gas prices moved higher yesterday as another outage at a gas field in Norway reduced output by 27mcm, limiting UK imports. UK LDZ demand is 2mcm higher today, while Norwegian exports to the UK resumed and Langeled flows are back to 70mcm. Linepack opened long as large storage withdrawals are currently being made. Mild weather and an end to Norwegian supply concerns should outweigh increased demand and prices are expected to fall. Today's prices can also be found in an easy to read table on our 'current UK energy price' page.

Gas contracts posted gains yesterday as the outage at a Norwegian gas field affected flows into the UK; flows dropped to 25mcm after averaging around 70mcm during January. Day-Ahead gas rose by 0.50ppt and March-14 climbed by 0.80ppt, while Summer-14 increased by 0.75ppt on the far-curve. The power curve also closed higher and was influenced by rising gas prices, Day-Ahead ended the day with a £0.25/MWh increase and Q2-14 rallied £0.85/MWh. Meanwhile, a decision has been made to 'fast-track' the carbon backloading proposal which led to a large gain in carbon prices.

Gas prices fell this morning with Day-Ahead registering a 0.05ppt loss and April-14 dropping by 0.50ppt. Langeled flows increased as the outage at Kollsnes was resolved and helped prices move down. The UK gas system opened 10mcm long and Summer-16 was the only contract to rise, adding 0.35ppt to its price. Power prices mirrored gas and moved down, Day-Ahead decreased as higher wind generation is expected on Monday. Further along the curve seasonal contracts garnered support from rising carbon contracts.

Market close data has revealed that the 1-year forward price for both commercial gas & commercial electricity moved higher- closing at 63.53ppt and £50.20/MWh, respectively. This can be seen in the graph below. 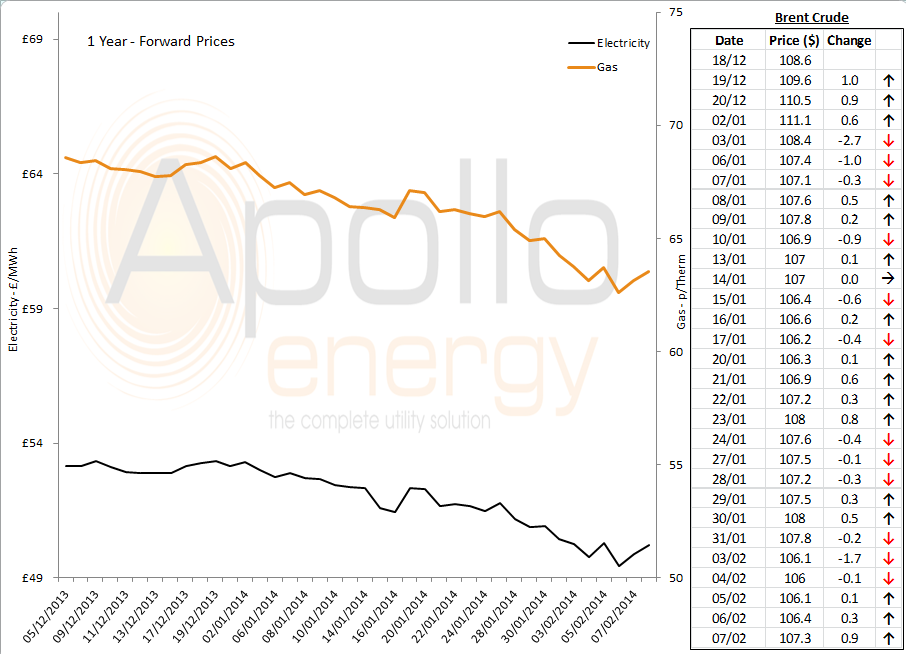