Spot power prices are expected to follow a bearish trend over the next few days with large losses forecast tomorrow due to higher wind generation and reduced demand. Healthy supply levels and continued weak demand helped to weigh on prices yesterday and any gains seen on Friday were cancelled out. Today UK demand is similar to yesterday's levels and should remain slightly below the seasonal average until the weekend at least; prices should fall further on the back of this low demand.

The gas curve continued to move down yesterday as Day-Ahead fell by 0.70ppt and Q4-14 recorded a 0.95ppt loss thanks to a long UK gas system. Improved LNG send-outs also provided support to the bears as demand remains relatively low. Power contracts also fell lower except for Day-Ahead, while July-14 was the biggest mover and shed £1.10/MWh from its price. Warmer weather is expected at the end of the month which was the main driver of prices. Day-Ahead closed at a £0.15/MWh premium despite healthy wind production.

South Hook send-outs currently stand just under 50mcm and are at similar levels to this time last summer, while additional LNG deliveries have been scheduled which will take stocks to above 80%. Overall storage levels are above 60% and these healthy supply levels have pushed prices lower despite on-going tensions in Ukraine. Peak wind generation is expected to drop to 4GW tomorrow which helped towards a £0.10/MWh increase for Day-Ahead power. Gas prices also had an effect on the power curve while stronger carbon contracts offered minimal support to the far-curve.

Market close data has revealed that the 1-year forward price for both commercial gas & commercial electricity registered a loss - closing at 59.28ppt and £50.38/MWh,respectively. This can be seen in the graph below. 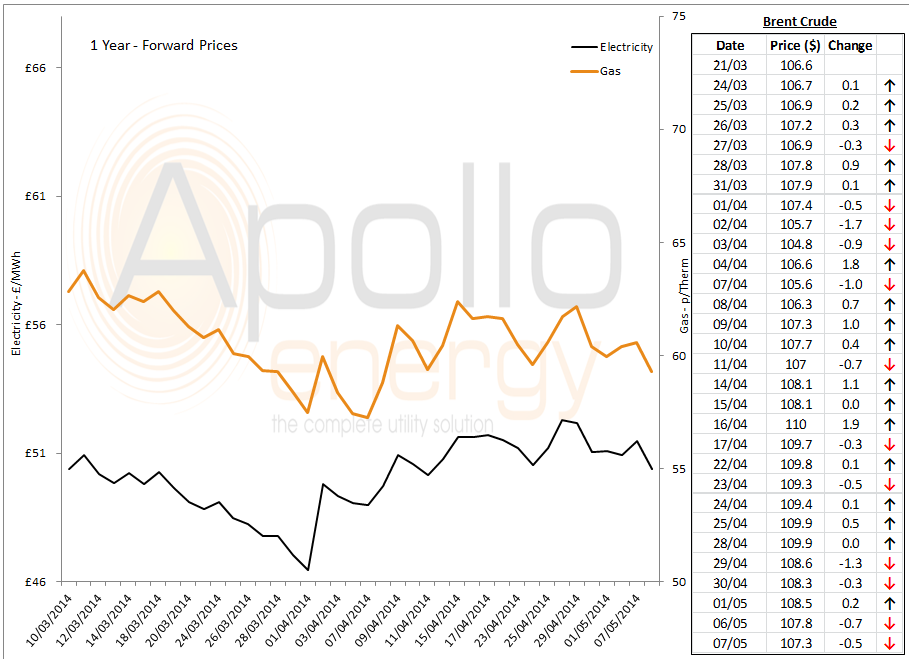 Brent 1st-nearby prices fell further yesterday despite concerns in Ukraine pushing up the price of crude oil. Brent fell by $0.66/b and dipped below $107/b at the end of the session while WTI remained around $100/b.