Spot power prices displayed mixed movement by the end of yesterday's session after recording sizeable gains in the morning. Mixed sentiment has continued this morning with healthy generation levels offsetting above average demand. Gas prices moved higher yesterday on the back of a short UK gas system due to higher demand, with further assistance coming from a weaker British Pound. The UK gas system remains tight this morning on the back of weaker Norwegian supply. However, temperatures are expected to improve next week which should lead to a stable-to-bearish outlook for this afternoon. Today's prices can also be found in an easy to read table on our 'current UK energy price' page.

Gas contracts increased yesterday as the UK gas system remained short, oil prices were on the rise and the British Pound weakened; these factors provided support across the curve. The majority of power contracts followed their gas counterparts and added to their price on Wednesday, with an expected drop in wind generation also providing support to the prompt. Stronger Brent also helped to lift contracts further along the curve, as did a weakening Pound.

LNG deliveries are set to be less frequent this month with just one cargo expected to arrive in the next fortnight; helping June-15 increase in value. The UK gas system has also opened short once again, although a warmer weather outlook for next week has helped to restrict this morning's gains. Scheduled maintenance at a number of gas facilities in the next two weeks should result in an increased reliance on gas-fired generation which has helped push some contracts on the near-curve higher. Overall movement on the curve is mixed with an expected rise in temperatures offsetting weaker generation.

Market close data has revealed that the 1-year forward price for both commercial gas & commercial electricity recorded small losses - closing at 47.83ppt and £45.08/MWh, respectively. This can be seen in the graph below. 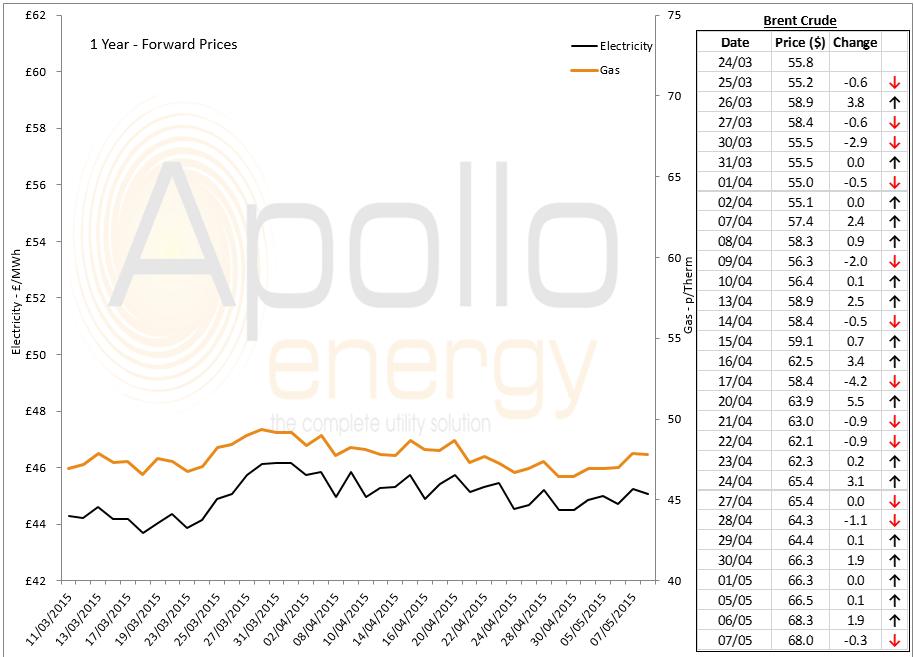 Brent 1st-nearby prices recorded a small loss overnight but still remain just above $68/b, however, a rebound is likely this afternoon.