Spot power prices have moved down again this morning as average-to-slightly above average weather is expected to result in comfortable demand levels. Meanwhile, weaker gas has offset the effects of thermal outages on the continent. Outages at Norwegian facilities, both scheduled and unscheduled helped near-curve gas prices to move higher yesterday morning, while weaker oil weighed on far-curve contracts. Norwegian gas flows have improved this morning which has resulted in a healthier supply picture in Europe, however, the UK gas system remains under-supplied due to high exports, prices have moved down nonetheless. Today's prices can also be found in an easy to read table on our 'current UK energy price' page.

The UK gas system opened 11mcm short yesterday which resulted in gains on the near gas curve. Gas flows via the Langeled pipeline fell by 30mcm due to maintenance in Norway and high exports to Belgium were the main contributors to the weak supply picture. Movement was predominantly bearish further along the curve with falling oil and a weaker Euro weighing on contracts. Power contracts decreased across the curve yesterday with a stronger British Pound and falling Brent asserting downward pressure on prices. An improved renewable generation forecast for today, combined with increased nuclear availability also helped the prompt contract close at a discount.

Gas prices have decreased this morning as Norwegian gas flows have improved and the LNG outlook is healthy. Two LNG deliveries are expected to arrive in the UK this week, with a further delivery scheduled to arrive at South hook on the 13th of July. The power curve has followed the movement of gas with numerous contracts recording a loss. Consumption levels are expected to remain around average levels for the time being and an improved renewable generation forecast helped the Day-Ahead contract incur another loss.

Market close data has revealed that the 1-year forward price for both commercial gas & commercial electricity decreased - closing at 44.98ppt and £43.73/MWh, respectively. This can be seen in the graph below. 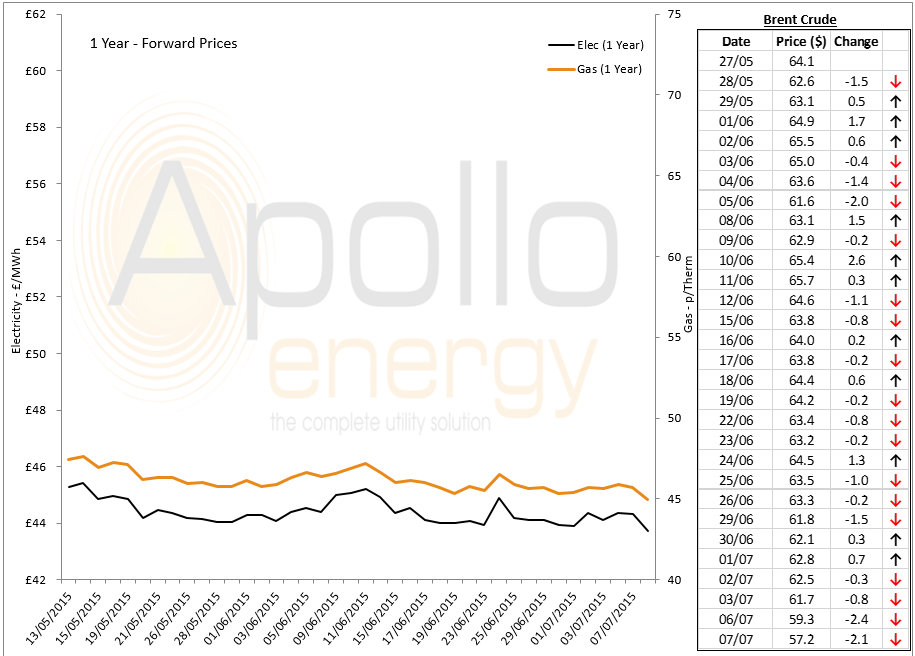 Brent 1st-nearby prices have recorded their largest loss since November, shedding around $4/b in yesterday's session. The current Greek crisis, the restart of Iranian oil production and general oversupply are the main factors for this drop.