Spot prices decreased yesterday due to an increase in wind production as well as improved nuclear generation in Germany. However prices are expected to go up tomorrow as renewable production is forecast to be lower. UK gas production was lower yesterday due to maintenance but weaker demand and a long system should see contracts turn bearish during today's session. Today's prices can also be found in an easy to read table on our 'current UK energy price' page.

The majority of gas contracts fell yesterday as flows via Langeled and St Fergus increased by 5mcm combined. The system was around 2mcm short by the end of the session but reduced demand and higher nuclear availability helped contracts turn bearish. An LNG shipment is also expected in the UK this week. Day-Ahead power went up by £1.50/MWh and closed at £49/MWh as wind production is thought to decrease today. Further along the curve, most contracts registered losses as Front-Month APi2 coal dropped to $74.75/tn. Brent recorded a gain of $0.60/bbl following optimistic EU growth data which limited the losses somewhat.

Most contracts made gains this morning despite higher Bacton BBL flows and a long system, the maintenance set to be carried out at Easington is considered to be the main driver of prices at present. Day-Ahead rose by 1.35ppt while the rest of the curve displayed smaller losses, stronger Brent also supported seasonal contracts. Most power contracts also climbed higher except Day-Ahead which fell by £0.35/MWh and Winter-13 which lost £0.15/MWh. Day-Ahead managed to record a loss despite peak wind generation levels forecast to be as low as 1.2GW tomorrow.

Market close data has revealed that the 1-year forward price for both commercial gas & commercial electricity made a loss - closing at 68.20ppt and £51.78/MWh, respectively. This can be seen in the graph below. 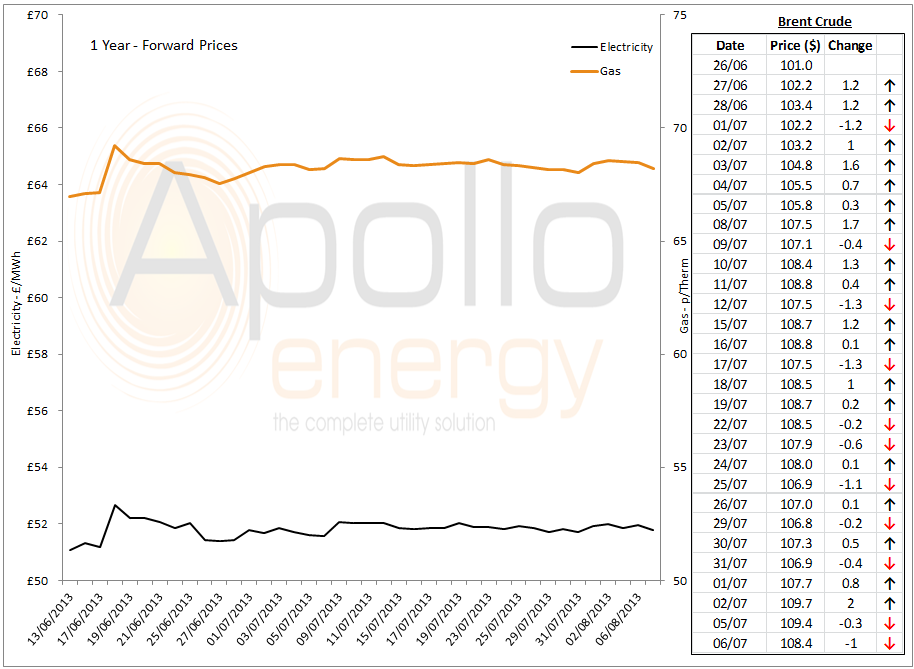 Brent prices fell to a low of 107.55 $/b yesterday thanks to fewer tensions in terms of threats to supply. The Brent/ WTI spread widened while gasoline cracks and gasoil cracks fell slightly.