Spot prices are slightly higher than they were last week as there has been a slight fall in renewable energy generation and a reduction in lignite capacities due to a number of outages. The next few days should see prices hold firm as wind and solar production is expected to remain at low levels until Thursday. The UK gas market saw healthy supply levels and gas consumption is also someway below the seasonal average at present which should lead to a bearish trend on the gas curve. Today's prices can also be found in an easy to read table on our 'current UK energy price' page.

The system opened 12mcm long on Friday but fell throughout the session and was balanced by early afternoon as improved Norwegian and Storage flows matched a rise in demand. Gas prices decreased slightly as Day-Ahead closed at 65.00ppt and two LNG cargoes are expected to arrive this week. Day-Ahead power was the only contract to go up on Friday and added £0.90/MWh to its price by the end of the session. Peak demand is expected to hit 40GW today which is thought to be the main factor for Day-Ahead taking a bullish turn. A nuclear reactor at Dungeness returned online on Friday and a coal-fired unit underwent maintenance at the weekend but should be fully functional again today or tomorrow.

The gas curve saw most contracts make gains this morning with Day-Ahead going up by 1.00ppt as the system opened 5mcm short. Gas flows were down by around 7mcm following reduced flows via the Bacton BBL, Langeled and South Hook pipelines. While weaker Brent prices restricted the gains that were registered on the Far-Curve. The power curve followed a similar trend to gas with every contract except Summer-14 adding to their price. Day-Ahead registered the largest gain of £1.30/MWh and weaker Brent and APi2 coal prices countered rising carbon contracts to limit the gains on the Far-Curve.

Market close data has revealed that the 1-year forward price for commercial gas made a loss while commercial electricity went up slightly - closing at 68.48ppt and £51.95/MWh, respectively. This can be seen in the graph below. 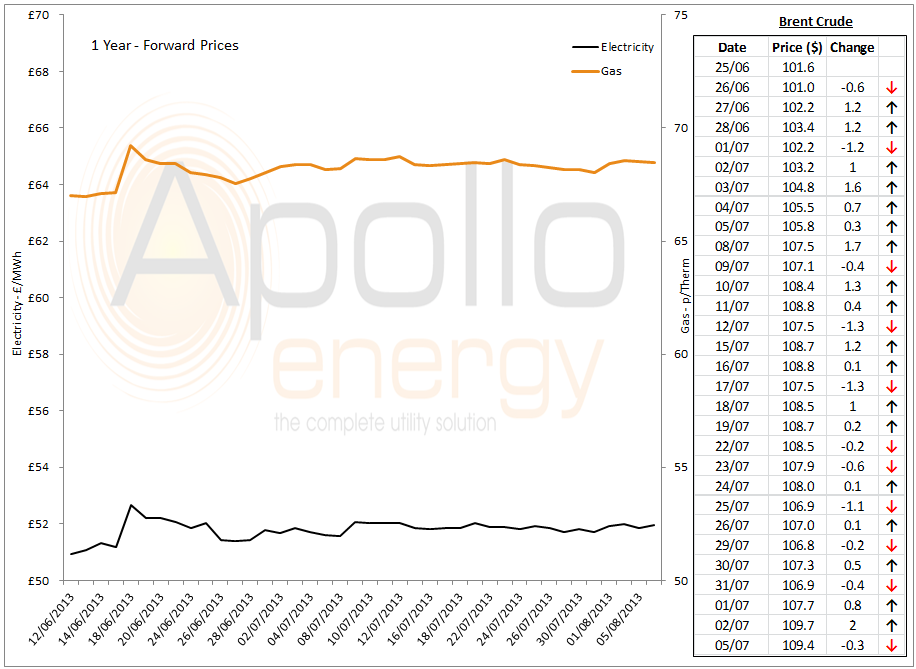 Brent prices fell slightly on Friday following the release of the US Non-Farm Payrolls report but prices took a bullish turn this morning.   An incident at the Marib oil pipeline in Yemen has stopped a 125kb/d flow of crude oil; just a week after being repaired.