Gas prices increased yesterday following a weaker supply forecast and a rise in demand. A restriction at the Langeled pipeline is expected to reduce Norwegian flows into the UK by 110mcm today, while the Britannia Field is also set to remain offline until the 18th of August. In terms of demand, exports to Belgium increased to 33mcm, leaving the system 10mcm short. Power prices also ended the session at a premium with influence coming from stronger gas and coal, cancelling out some of the losses which were recorded earlier in the week. Day-Ahead power recorded another increase on the back of a weak wind generation forecast, while Front-Month also displayed a rebound after dropping to a 4-month low on Wednesday.

Gas prices moved higher this morning as Norwegian imports into the UK have decreased significantly and Belgian exports remain strong, resulting in short supply. However, a warmer weather forecast and weaker oil prices have restricted some upward movement. Power prices have tracked the movement of gas this morning with the majority of contracts displaying a gain. Weakening oil has helped to limit some upward movement on the far-curve but a weaker Pound provided another bullish factor. Elsewhere, increased demand and a drop in wind generation supported the near-curve.

Market close data has revealed that the 1-year forward price for both commercial gas & commercial electricity increased - closing at 42.78ppt and £42.68/MWh, respectively. This can be seen in the graph below. 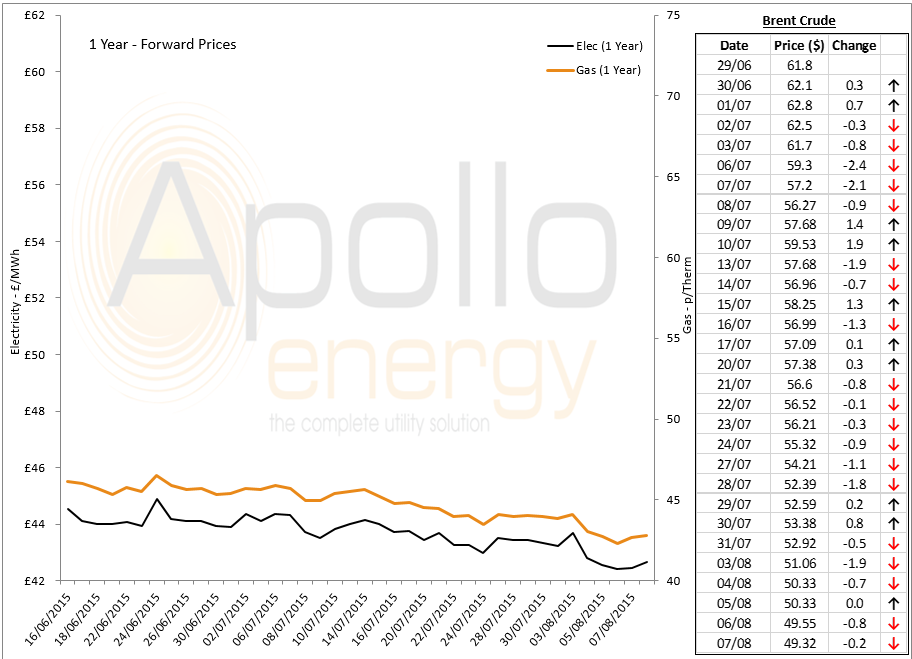 Brent 1st-nearby prices have displayed another loss this morning and trade below $49.4/b with no obvious bullish factors able to lift the contract back above $50/b.