Gas prices were on the rise yesterday as it was announced that production at the Groningen facility in Holland could be cut significantly due to safety reasons; a sharp rise in Brent also supported contracts. Today the market waits for official confirmation of Dutch production cuts and gas prices are currently supported by oil which continue to increase.

Gas prices surged yesterday afternoon as the Dutch government voted in favour of cutting production at the country's largest gas facility, with the largest gain recorded by the prompt. Further out, additional support was provided by rising oil contracts and a colder weather forecast.

Power prices were generally stable at the beginning of the session but found support from stronger gas contracts in the afternoon. Demand levels are also set to increase as colder weather hits the UK this month and fuel prices are currently bullish.

Gas prices continue to climb higher today as the UK gas system is undersupplied following a drop in Norwegian imports and weaker LNG supply. Temperatures are also expected to be below average during October, while stronger Brent has helped far-curve contracts add to their price.

The power curve has displayed further gains this morning but the upward movement is not as significant as that shown by gas. The price increases have been caused by rising gas, oil and coal, while weaker wind generation has also helped the Day-Ahead contract to rally higher.

Market close data has revealed that the 1-year forward price for both commercial gas & commercial electricity displayed a significant increase - closing at 42.08ppt and £42.73/MWh, respectively. This can be seen in the graph below. 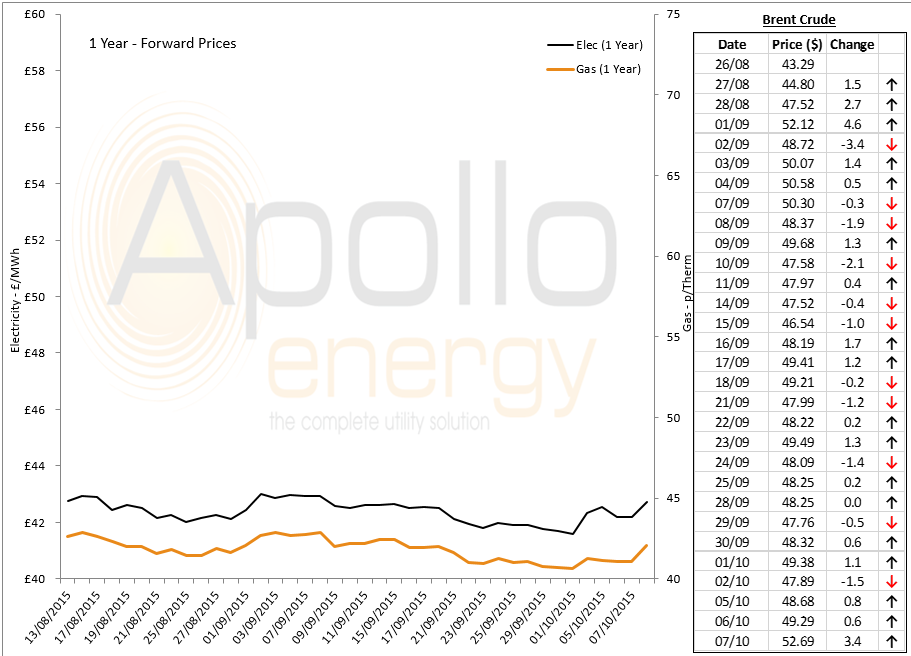 Brent 1st-nearby prices displayed a large increase yesterday, recording a gain of over $3/b. The recent EIA report offered support as US oil production is expected to decrease, with officials from OPEC, the IEA and Shell also predicting a spike in the oil market for various