Spot prices remained low on Friday thanks to healthy wind generation although prompt power contracts strengthened on the back of a higher demand forecast. NBP spot prices fell due to milder weather and ample supply levels, strong flows from Norway led to a comfortable system which was able to cope with high demand. UK LDZ demand has fallen by 35mcm today and is currently 11.7% below the seasonal average. Supply levels are still healthy due to strong Norwegian output and temperatures should be rather mild for this time of year; prices are expected to decrease as a result. Today's prices can also be found in an easy to read table on our 'current UK energy price' page.

Gas contracts made losses on Friday, influenced by above average temperatures which pushed demand down and led to Day-Ahead falling by 0.90ppt. Elsewhere on the near-curve, front-month decreased by 0.45ppt as all prompt contracts closed at a discount. Further along the curve minor losses were also observed, ranging between 0.05ppt and 0.20ppt. The power curve took direction from its gas counterpart with Front-Month falling by £0.05/MWh and Day-Ahead shedding £1.00/MWh from its price. Mild weather helped lower demand which was the main driver of this bearish tension.

Further losses were made this morning as linepack started the session at 25mcm long, demand remains low thanks to weather which is around the seasonal average. Gas flows fell slightly following a decline in storage withdrawals with only Holford registering any output. The UK interconnector is still set to export mode and the Zeebrugge/ NBP spread narrowed to -0.50ppt. Power contracts also made losses with Day-Ahead opening £1.00/MWh lower and January-14 falling by a similar amount. Wind production has increased and now holds a 14% share of the generation mix with gas-fired generation dropping from 28% to 16%.

Market close data has revealed that the 1-year forward price for both commercial gas & commercial electricity decreased - closing at 68.10ppt and £53.10/MWh, respectively. This can be seen in the graph below. 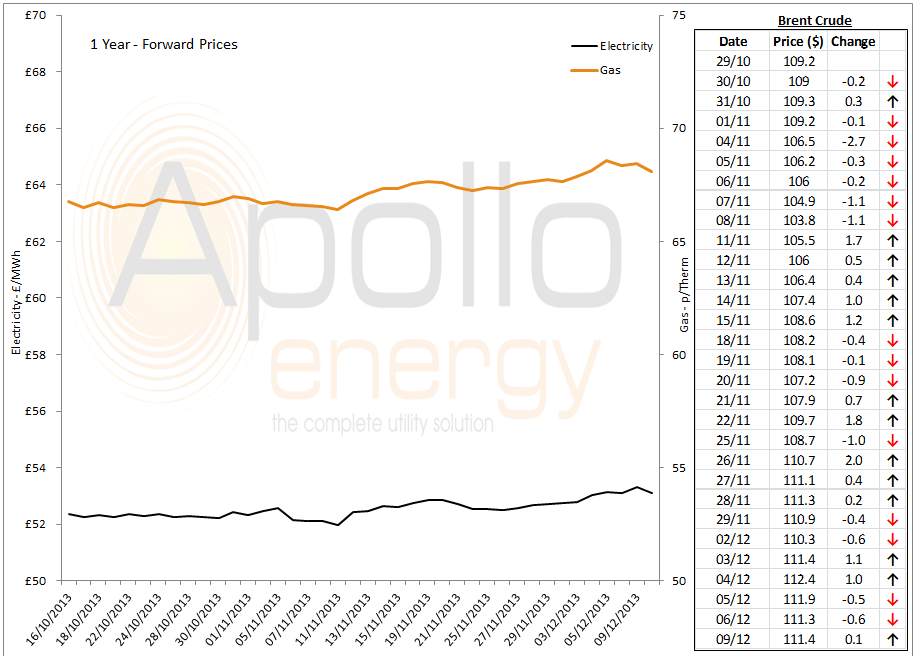 Brent 1st-nearby prices climbed higher by the end of Friday's session following a positive US employment report and prices have opened up around $111.5/b this morning. WTI made a small gain on Friday but recorded a $5/b price increase at the start of today's session.