Spot prices moved higher yesterday as colder temperatures have been forecast and wind generation has dropped in Germany. Yesterday's mild temperatures and improved Norwegian flows helped gas prices fall as the UK gas system was over-supplied. Today UK LDZ demand has dropped by 5mcm and remains 17.1% below the seasonal average, while Langeled and BBL flows have seen little change meaning the system is over-supplied once again. However the forecast of colder weather is expected to help prices rise today. Today's prices can also be found in an easy to read table on our 'current UK energy price' page.

Day-Ahead gas lost 0.40ppt yesterday on the back of stronger flows and an over-supplied system; Linepack opened 7mcm long and remained long for most of the day. The majority of contracts across the curve also fell with March-14 decreasing by 0.10ppt and Winter-14 closing at a 0.15ppt discount. Power contracts moved higher yesterday as Day-Ahead registered a £0.30/MWh loss as demand is likely to increase due to the expected drop in temperatures; Front-Month and Front-Season also fell. Wind production has been high over the past few days but it is expected to decrease in the coming days, gas-fired generation now holds a higher share of the generation mix.

Temperatures have dropped slightly this morning and this cold snap is expected to last for the rest of the week; as a consequence Day-Ahead gas has climbed 1.15ppt higher. This gain was despite the UK gas system opening 13mcm long thanks to stronger flows from the Bacton BBL interconnector and Langeled, healthy storage levels also helped restrict the gains. The power curve took direction from its gas counterpart and displayed gains which ranged from £0.10/MWh for Q2-14 to £0.45/MWh for Front-Month. Carbon contracts also strengthened following a cut in permit contracts which provided additional support to the power curve. Some bearish tension was offered by weaker APi2 coal which fell by $0.15/tn and helped limit the price increases.

Market close data has revealed that the 1-year forward price for commercial gas increased while commercial electricity moved down slightly - closing at 67.10ppt and £52.65/MWh, respectively. This can be seen in the graph below. 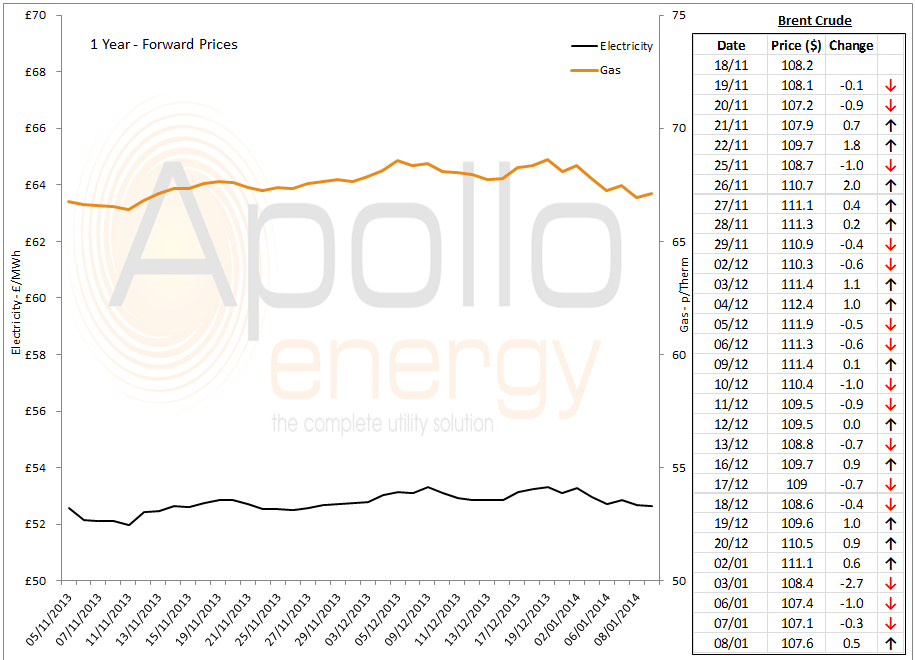 Brent 1st-nearby prices rose yesterday following uncertainty on Libyan supply and a drop in US crude inventories. Brent increased by $0.62/b to remain above $107/b and the Brent/ WTI spread stands at -$13.53/b.