Spot power prices are rather low this morning compared to the seasonal norm and are expected to fall further as the week goes on. European temperatures are forecast to improve while wind generation should also remain healthy. Gas prices decreased on Friday as Norwegian flows climbed back to previous levels prior to two gas fields suffering outages midweek. UK LDZ demand is 17mcm higher this morning as the UK is the exception to the milder weather and below average temperatures are expected. However, bearish fundamentals and reduced demand on the continent could help prices fall in the coming days. Today's prices can also be found in an easy to read table on our 'current UK energy price' page.

The gas curve decreased further this morning with Day-Ahead opening at a 0.70ppt discount and Front-Season falling by 0.55ppt. The UK gas system opened around 30mcm long despite higher demand as flows via Langeled and BBL ramped up. The improvement in gas flows allowed the Rough storage facility to reduce its withdrawal rate by 20mcm. Power prices also moved down with stronger wind generation forecast for tomorrow, helping to push Day-Ahead lower which shed £1.55/MWh from its price. Bearish movement was also displayed further along the curve as March-14 opened £0.65/MWh lower and April-14 displayed a £0.80/MWh loss.

Market close data has revealed that the 1-year forward price for commercial gas decreased while commercial electricity moved higher- closing at 63.45ppt and £50.40/MWh, respectively. This can be seen in the graph below. 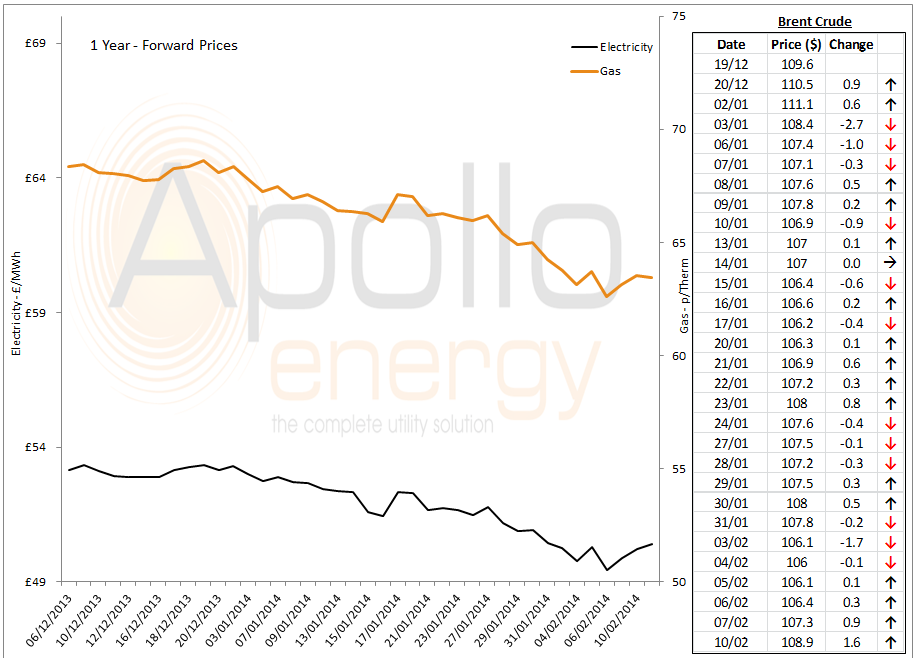 Brent 1st-nearby prices rose by almost $2/b to $109.74/b on Friday, its highest level since January 2nd. WTI climbed over $100/b temporarily to reach a 6 week high as cold temperatures in the US dictated the market.