NBP prices made gains yesterday apart from some seasonal contracts as a result of lower gas supplies in the UK; Day-Ahead went up by 0.35ppt to close at 64.8ppt. There was an outage at the St Fergus shell Terminal which led to a decrease in flows to the system but Linepack was running at normal levels, storage facility levels currently stand at 20%. Day-Ahead power fell by £1.35/MWh with a high wind forecast having an effect as availability is expected to be high throughout the week, however most contracts on the Far-Curve rose slightly. APi2 coal prices climbed in price yesterday with June-13 closing at $85/tn, with a possible strike anticipated at Newcastle port.

NBP contracts saw a series of losses with June-13 dropping by 0.35ppt which remains the cheapest front month at present. The system opened at 7mcm long with flows from the Langeled pipeline standing at 53mcm, half of its maximum capacity. The Bacton Interconnector is currently set to export mode because of the 1ppt NBP and Zeebrugge WD contracts spread and Brent Crude opened just above $104/bbl. The power curve opened with most contracts making a loss, Day-Ahead fell to £45.30/MWh as a result of the strong wind availability. Combined Cycle Gas Turbines currently hold 23% of the fuel mix and nuclear generation's share saw a slight decrease despite the Heysham nuclear reactor becoming operational again.

Market close data has revealed that the 1-year forward price for both commercial gas & commercial electricity made a slight gain - closing at 67.35ppt and £51.75/MWh, respectively. This can be seen in the graph below. 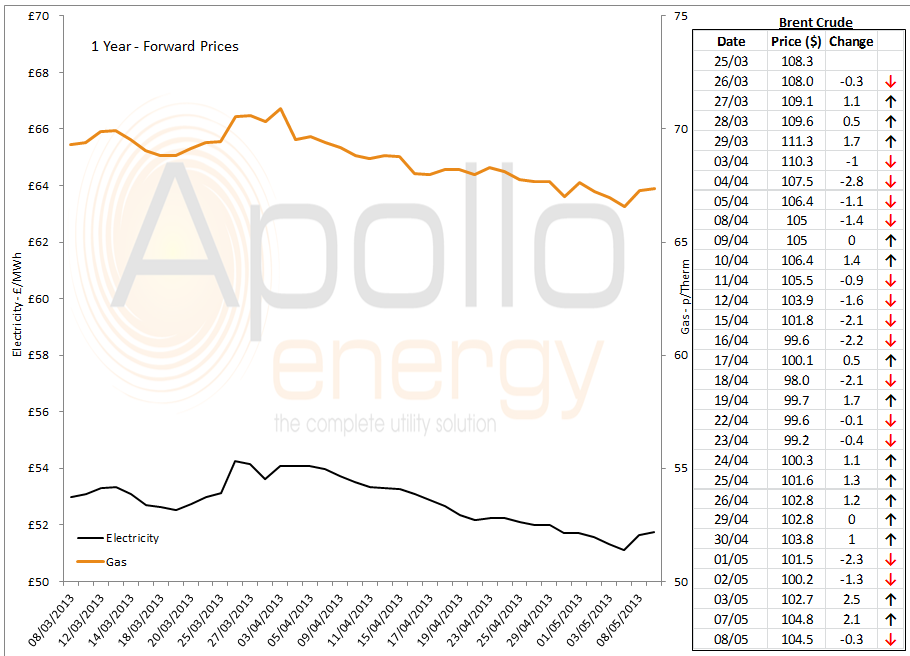 Brent Crude made a slight drop in price to open up at $104.5bbl after figures showed that Chinas crude imports made an increase last month. However low global demand and a well-supplied market will be one of the major determining factors in coming weeks, it is thought.