Power prices weakened yesterday as supply levels were healthy and weaker carbon contracts provided further bearish impetus. Today prices are expected to rebound slightly as the colder weather forecast for the rest of the week should lead to a small rise in demand. Gas contracts also followed a bearish trend on Wednesday as storage levels and overall supply were healthy. However upward movement is expected today as a reduction in BBL flows has tightened supply. Today's prices can also be found in an easy to read table on our 'current UK energy price' page.

Gas prices on the near-curve fell by as much as 0.55ppt yesterday while contracts further out saw losses up to 1.20ppt. Traders are hopeful that gas storage levels in the UK will be at 100% by the end of summer as a weak Day-Ahead contract should lead to healthy injections. Any concerns regarding gas imports into the UK via pipelines were eased by healthy LNG supply. Day-Ahead power shed £1.60/MWh from its price and took direction from the return of numerous coal-fired power plants and weak gas prices. Prompt prices were also weaker with the losses ranging from £0.10/MWh for August-14 to £0.80/MWh for Q4-14. Meanwhile, falling carbon contracts helped to weigh on the far-curve although the losses were less prominent.

Most gas contracts recorded gains at the start of today's session with Day-Ahead climbing 0.40ppt higher following a 50% drop in BBL flows, leading to a gas system which was 20mcm short. August-14 was the biggest mover on the near-curve and added 0.60ppt to its price, while movement on the far-curve was fairly mixed with winter contracts opening at a discount. Day-Ahead power followed its gas counterpart and opened £0.55/MWh higher but still remains below £40/MWh for the third day in a row. Winter-14's price fell below Summer-15's in yesterday's session and opened £0.15/MWh lower than the summer contract this morning.

Market close data has revealed that the 1-year forward price for both commercial gas & commercial electricity recorded a loss - closing at 58.43ppt and £49.65/MWh,respectively. This can be seen in the graph below. 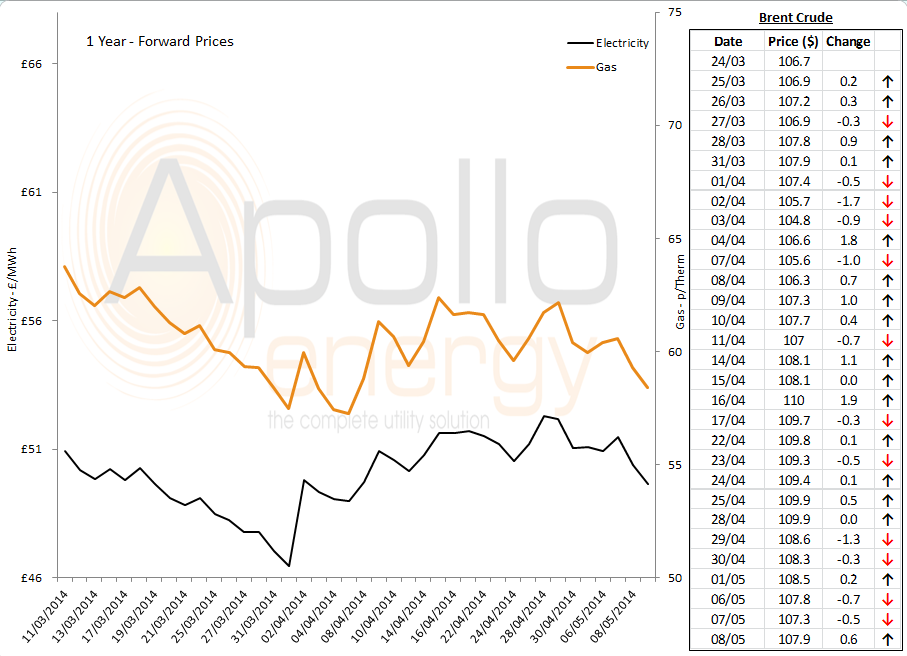 Brent 1st-nearby prices have moved $0.59/b higher and currently stand just above $107.9/b with the Ukrainian crisis adding to market uncertainty.