Spot power prices are on the decline today as warmer weather is expected to return to the UK next month and generation levels are generally comfortable. Meanwhile, weakening oil is also providing additional support to the bears. Gas prices moved down yesterday on the back of a warmer weather outlook, although movement in the afternoon was minimal as traders awaited the result of the UK general election. Today prices have continued on a downward trend with a healthier fundamental outlook and weaker oil weighing on most contracts. Today's prices can also be found in an easy to read table on our 'current UK energy price' page.

The gas curve displayed losses yesterday as weakening oil influenced the majority of contracts. However, downward movement on the near-curve was restricted by outages at the Bacton SEAL pipeline and at the Skarv field in Norway. Power prices were influenced by a reduction in carbon emission costs and weaker fuel prices on Thursday. A weaker Euro also helped to weigh on contracts as the price of importing gas from the continent has decreased for the time being. Day-Ahead was the exception to the bearish trend as weaker wind generation offered support.

Gas prices displayed further losses this morning as a stronger British Pound and falling Brent continue to drive the market. An expected uptick in temperatures is also expected next week which should lower demand, although Norwegian supply is still reduced due to an outage. Power prices have also displayed a decrease with weaker gas and Brent the main contributing factors. Fundamentals are forecast to be healthier next week which should see a drop in consumption and a comfortable generation picture.

Market close data has revealed that the 1-year forward price for commercial gas recorded a small gain, while commercial electricity was unchanged - closing at 47.92ppt and £45.08/MWh, respectively. This can be seen in the graph below. 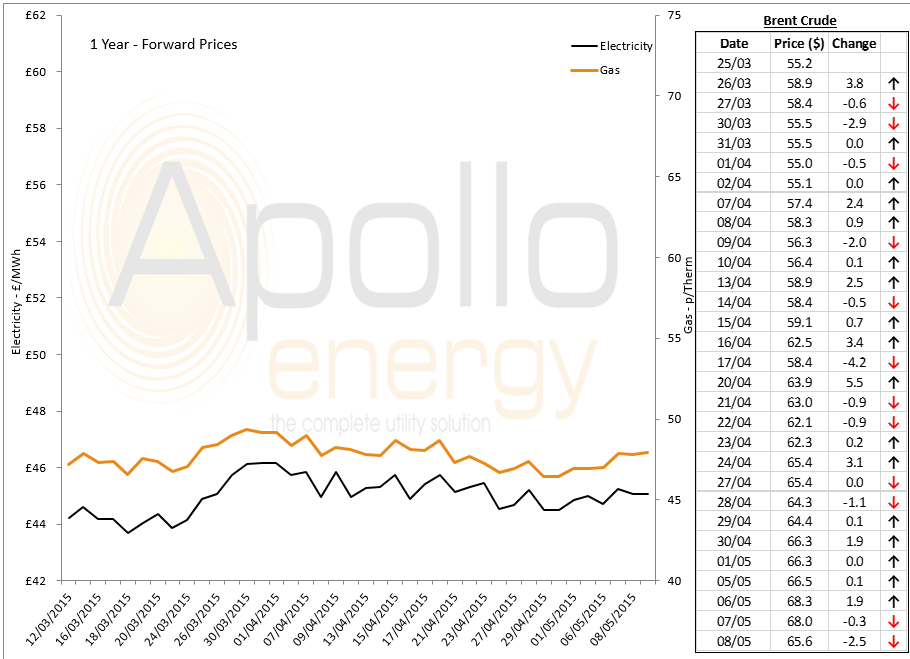 Brent 1st-nearby prices displayed a loss of around $2.5/b overnight following a sustained period of upward movement, with news that oil production in the US is set to increase.