Spot power prices remained steady this morning, with losses being recorded further out on the curve. There is the potential for carbon prices to drive power prices down today if the EU Parliament votes 'no' towards a 'market stability reserve' compromise.

The UK gas curve remained bearish yesterday following the continued fall in Brent crude (10.3% since the 1st July) and reduction in demand. Demand yesterday was 20mcm lower than the seasonal average, falling 7mcm day on day. Gas flows via the Langeled pipeline recovered 4mcm yesterday though ongoing maintenance has contributed to a weak supply.

Gas prices have remained steady this morning though the UK system is still slightly under-supplied which could support spot prices today. Storage levels across Europe are relatively low for the time of year and are reinforced by a decrease in Dutch storage injections.

The power curve recorded gains on the Day Ahead this morning whilst further out losses continued, with Winter-15 dropping another £0.20/MWh. Peak demand is expected to fall to 34.7GW today, whilst wind generation is set to improve again.

Market close data has revealed that the 1-year forward price for commercial gas has remained constant, whilst commercial electricity decreased slightly - closing at 44.98ppt and £43.53/MWh, respectively. This can be seen in the graph below. 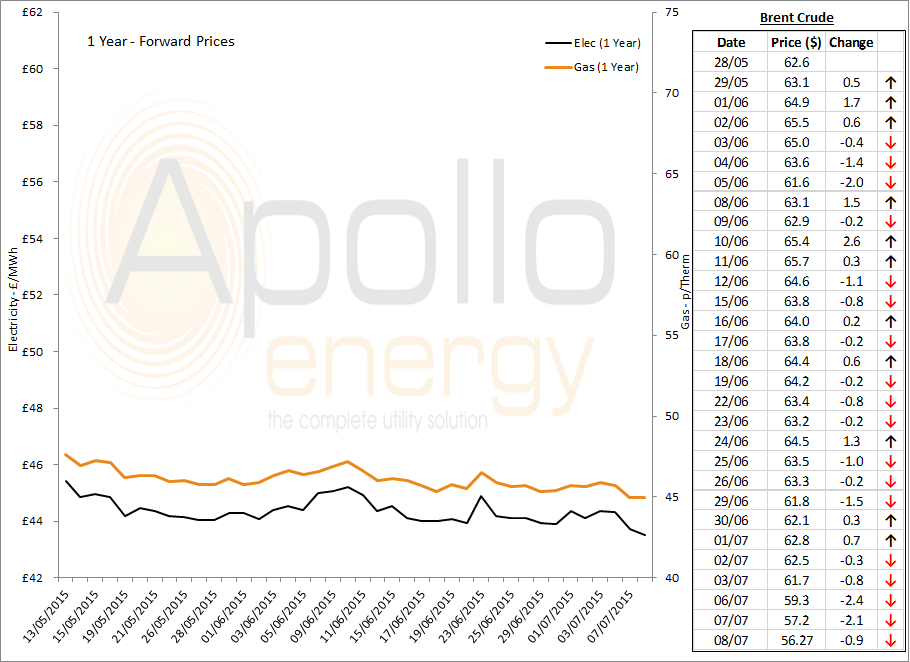 Brent crude steadied yesterday after shedding 10% of its value over the last two days. Ongoing concerns relating to the Greek crisis, the extension of the Iranian talks and the increased apprehension in China all mean that the market maintains a firm downward trajectory today.